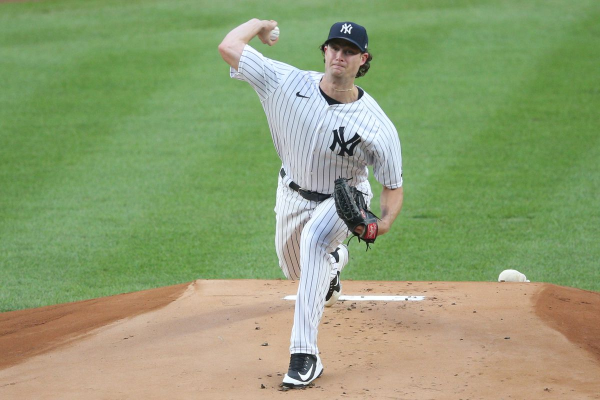 After a Tuesday’s opener was rained out, the New York Yankees (16-9) will be traveling to Turner Field to take on the Atlanta Braves (16-12) in a doubleheader on Tuesday. The first game, which we will focus on here, is set to get started at 4:10 pm ET with the Tuesday makeup to follow.

For the Yankees, it has been a while since they played. Their weekend series against the Mets was canceled due to COVID-19 concerns and now had Tuesday’s matchup canceled. The last time they played, they were being swept in a three-game series at the hands of the Tampa Bay Rays, who have overtaken them for first in the AL East.

The Braves took two of three over the weekend but lost their last game against the Phillies, 5-4. They currently are in first place in the NL East, a game ahead of the Miami Marlins.

The pitching matchup for this one is an interesting one. The Yankees will role with ace Gerrit Cole (4-0, 2.75 ERA) while Ian Anderson, Atlanta’s third-ranked prospect, will be making his major league debut.

On the offensive side, these are two of the best teams in baseball at scoring runs. The Yankees currently rank 3rd in the majors averaging 5.40 runs per game. For the Braves, they come in 7th overall averaging 5.18 runs per game.

On the defensive side, these two once again come in close to one another. The Yankees rank 7th in terms of runs allowed per game at 4.28 while the Braves come in 9th, allowing 4.39 runs per game to opponents.

After having five days off of baseball, the Yankees will be excited to get back onto the field. They will be even more excited because they will be welcoming back outfielder Aaron Judge, who has been activated off of the injured list.

On the mound for the Yankees will be ace Gerrit Cole. This season, Cole has been as advertised since the Yankees signed him to a massive contract over the offseason. In six starts, he is 4-0 with a 2.75 ERA, 0.89 WHIP, and has struck out 44 in 36 innings. He will look to keep it going against the Braves Wednesday.

Atlanta Welcomes Back Their Slugger

The New York Yankees aren’t the only ones welcoming back a superstar. The Braves have activated outfielder Ronald Acuna Jr. off the injured list in time for Wednesday’s game.

The Braves will start the youngster Ian Anderson. This will be Anderson’s major league debut, but he had 26 starts between double and triple-A, posting a 3.38 ERA last season. He comes in as the 43rd prospect on MLB’s top-100, so it will be interesting to see how he fares.

Hard To Bet Against Cole

I think Ian Anderson can become a star in MLB, but Gerrit Cole already is. To this point, he has been electric for the Yankees, and there is nothing to think that won’t continue on Wednesday. For my money, I am taking the Yankees in this one.