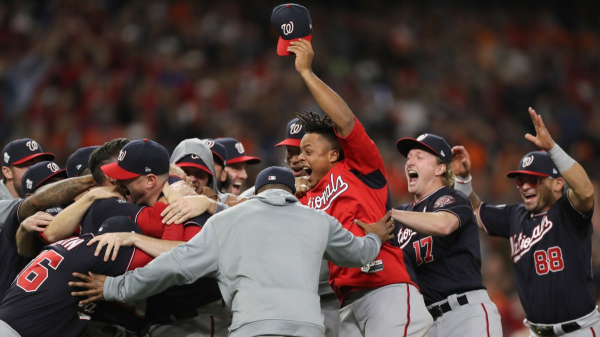 Throughout this postseason, the trio of bats in the middle of the lineup – Anthony Rendon, Juan Soto, and Howie Kendrick – have been the heart and soul of the Washington Nationals. Before Wednesday’s Game 7, Washington had come from behind to win four elimination games throughout the postseason. Now, they’ve done it five times, and they’re World Champs.

As the Nationals entered the seventh inning of Game 7 of the World Series having earned only a single hit off Astros starter Zack Greinke and down 2-0, they needed something special. With a seventh-inning rally that nobody on the Nationals will soon forget, everything changed in what seemed like the blink of an eye.

After Greinke recorded the first out of the inning, Rendon stepped to the plate and hit a solo blast that cut the Astros’ lead in half. Next up was Soto, who earned a walk to put a man on base.

That walk prompted a pitching change for Houston, which pulled Greinke and sent out Will Harris. Two pitches later, Kendrick was rounding the bases after slicing a home run into the metal screen attached to the right-field foul pole.

As if it were written in a movie script, the heart and soul of this Nationals team came from behind with one last seventh-inning rally and never looked back.

In the end, the Nationals would add three more runs over the next two innings to earn a 6-2 victory and bring home Washington’s first World Series since the 1924 Senators. After winning both his starts in the World Series, starter Stephen Strasburg was named MVP.

For the first time in Major League Baseball history, the away team won all seven games of the World Series, and the team entering the divisional round with the worst odds of winning the title of the eight remaining teams at 18/1 is now the champion.

However, as we congratulate the Nationals on an unforgettable year, it’s never too early to begin looking ahead to next year.

Favorites for the 2020 World Series

Although the sting of letting a 3-2 series lead get away will stay with this Astros team for a while, Houston can find solace in the fact that it still has one of the most complete teams in baseball.

Because of that balance and prowess in both sides of the game, the Astros are the odds-on favorite to win the 2020 World Series at +400. That’s no surprise after Houston was able to win a majors-best 107 regular-season games.

Directly behind the Astros is the NL favorite, the Los Angeles Dodgers, who are sitting on the second-best odds of +450 to win the Fall Classic in 2020 after earning an NL-best 106 wins in 2019. We’ll find out if the Dodgers will finally avoid postseason disappointment next year.

A pair of perennial American League powerhouses and staunch rivals are third and fourth on the list of odds as the New York Yankees (+600) aim to add more pitching to their deadly lineup, while the Boston Red Sox (+900) will be eager for October baseball after missing out this year.

And after winning the 2019 World Series, the Washington Nationals round out the top five with odds of +1000 to repeat in 2020. If the Nationals can re-sign Anthony Rendon and keep him alongside 21-year-old Juan Soto, it will be impossible to ever count this team out.

Next on the list is a wonderfully talented young baseball team in Atlanta, as the Braves currently hold +1200 odds of winning the World Series with Ronald Acuna Jr. leading the charge.

Another American League team is seventh on the list. Depending on who the Indians can bring back and add, their good balance between pitching and hitting earns Cleveland +1600 odds of winning the 2020 World Series.

And with a new manager in Chicago, the Cubs join a list of three playoff teams from 2019 – Minnesota, Tampa Bay, and St. Louis – as a group of four with +2000 odds to win the World Series next year.