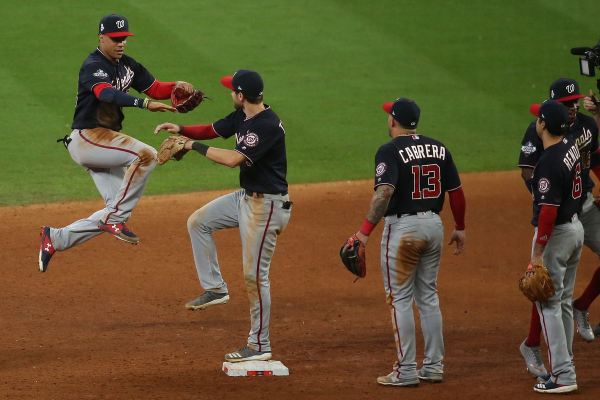 Not only did the Washington Nationals steal Game 1 of the World Series in Houston on Tuesday night, but they did so against the hottest pitcher in baseball. Handing Gerrit Cole his first loss in 26 starts, Washington looked perfectly comfortable in the underdog role with a 5-4 victory to start the Fall Classic.

After jumping out to a 2-0 lead in the first inning, the Houston Astros must have felt invincible with Cole on the mound. Although Cole hadn’t lost since May and was carrying a 0.40 ERA into the World Series, the Houston ace would end the game with five earned runs allowed in seven innings.

The win would go to Max Scherzer, who pitched five innings of two-run ball after settling in beyond the first inning.

The hero of the evening was 20-year-old Juan Soto, who hit a game-tying homer off Cole and ended up batting in three of Washington’s five runs. Soto went 3-for-4 in the game and turned a World Series heavily favoring the Astros on its head.

Expecting a pitching duel with Cole and Scherzer on the mound in the series opener, the over/under was set at 6.5 runs. With nine total runs scored, these two aces were more vulnerable than most experts thought.

To win the game, Houston was a -195 favorite at home. That was no surprise with the Astros riding the momentum of an American League Championship Series victory, but the Nationals were up to the challenge.

So, can Washington steal another game in Houston on Wednesday?

Can the Astros, who won a Major League-high 107 games in the regular season, disrupt that momentum in Game 2?

After handing Cole his first loss in 26 starts, the Nationals will aim to steal another game in Houston by sending out right-hander Stephen Strasburg (18-6, 3.32 ERA). Among pitchers with at least five postseason starts, Strasburg’s 1.10 postseason ERA is the third-lowest in MLB history.

This postseason, Strasburg has walked only one on his way to a 1.64 ERA.

Right-hander Justin Verlander (21-6, 2.58 ERA) gets the start for the Astros. Culminating in a 3.70 ERA, Verlander has a couple of losses in addition to a pair of strong outings so far this postseason. After Tuesday’s loss, this suddenly feels like a must-win home game for Verlander and the Astros.

Meanwhile, Houston will be relying on Jose Altuve, who leads the club with a .333 average and five home runs on top of eight RBI.

Are the tides turning towards a Washington World Series victory, or are the Astros still the favorite to win it all?

With an over/under of 7.5 runs, the Astros enter Game 2 as a -183 favorite with Verlander on the mound. Although Washington is sending out a hot arm in Strasburg and a hot bat in Soto, oddsmakers are counting on Houston’s home-field advantage.

What about the series as a whole?

After a Game 1 victory for Washington in Houston, the Nationals and Astros are now even odds to win the World Series. That’s a wild change after the Astros entered the series as -235 favorites, the biggest line in the past 12 years.

With the benefit of a 1-0 series lead, the Nationals are now on level ground after showing they can defeat the best of the Astros’ arms.