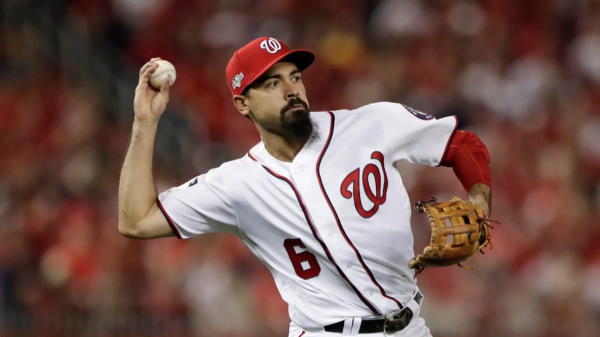 The moneyline for this matchup features the St. Louis Cardinals at +115 and the Washington Nationals at -155. The over/under in terms of runs scored is set at 7.

On the offensive side, it is the Washington Nationals who come out ahead. They rank sixth in the majors in runs per game, averaging 5.31 runs (5.56 at home). The Cardinals come in 19th, averaging 4.68 runs per game (4.71 on the road).

It would be an incredible understatement to say that the Cardinals blew a good opportunity by giving up the first two games of the series at home. Now having to travel into enemy territory, they will turn to their ace, Flaherty, to try to get a win back.

It will be interesting to see if Jose Martinez gets a start on Monday, considering he has two of the Cardinals’ four hits this series.

After getting dominant starts from Anibal Sanchez and Max Scherzer, the Nationals are hoping Strasburg can follow suit. Strasburg went 18-6 in the regular season with a 3.32 ERA, 1.04 WHIP and opponents hit .210 against him.

On the offensive side, Anthony Rendon continues to rake. Considered a serious candidate for the NL MVP, Rendon has gone .346/.457/.577 this postseason, with three doubles, a home run, five runs batted in and six runs scored.

Also performing well has been Ryan Zimmerman. The veteran is hitting .304/.333/.522 with a home run. Throw in players like Juan Soto and Trea Turner, and the Nationals certainly have an intimidating lineup.

Flaherty versus Strasburg could be one for the ages. If either of these starters is on top of his game, it could be lights out for the opponent. Still, all things considered, I like the chances of the Nationals better than the Cardinals.

Their offense has been clicking in this championship series, unlike St. Louis’, and they get to play at home, where they have averaged over 5.5 runs per game. Again, if Flaherty is feeling it, the Nationals could be in trouble, but for my money, I like the Nationals at -155 in this one.