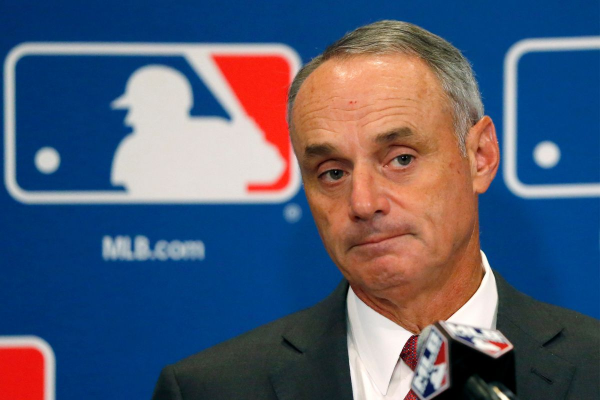 It’s the middle of June, yet we still have no idea if the 2020 baseball season will ever get underway.

When the major sports leagues in the United States were beginning to formulate return-to-play plans, the MLB was aiming for an Opening Day over the Fourth of July weekend. That plan had us in the middle of “spring training” right now, yet there’s no on-field preparation in sight.

Instead, the players have rejected Major League Baseball’s latest proposal. And rather than offering a counterproposal of their own, the MLB Players Association has told the owners and commissioner Rob Manfred to set the schedule.

As part of a statement released Saturday evening, MLBPA executive director Tony Clark said, “Further dialogue with the league would be futile. It’s time to get back to work. Tell us when and where.”

MLB responded with a statement of its own, saying, “We are disappointed that the MLBPA has chosen not to negotiate in good faith over resumption of play after MLB has made three successive proposals that would provide players, clubs and our fans with an amicable resolution to a very difficult situation caused by the COVID-19 pandemic.”

Those statements shed light on the fact that ownership and players remain significantly far apart on a plan for a return to the 2020 season. It appears that players are done negotiating and that the labor strife between the two sides has further deepened.

Where Does Baseball Go From Here?

Although players have told MLB to set a schedule, that doesn’t necessarily mean the league’s spring training period is imminent.

The first hurdle is the fact that no health-and-safety plan has been agreed between ownership and players. And rising coronavirus cases won’t help Major League Baseball usher in the sport’s return.

Then comes the potential for grievances.

If baseball sets a schedule and implements a season, the players could file a grievance against the league for not fulfilling its obligation to play as many games as possible.

The league could also file a grievance against the players for failing to participate in good-faith negotiations regarding player salaries for a season in which fans will not be in attendance at games.

Such grievances would be heard by an arbitrator, likely further pushing back the beginning to any 2020 season.

All of this comes after Manfred recently declared, “unequivocally we are going to play Major League Baseball this year … 100%.”

Still demanding full prorated salaries, the players were quick to dismiss such a proposal.

For now, the odds we’re used to paying attention to will take a back seat. Before we focus on the favorites to win the World Series or which player will win the AL Cy Young Award, we must first turn to another vital betting line.

Baseball’s in-house fight has led to tightening odds on whether or not there will be a 2020 MLB campaign.

While Manfred is releasing statements guaranteeing a 2020 campaign, the odds are telling us a different story — a story that says there’s a significant chance there’s no Major League Baseball this year.

As owners and players continue to quibble, that “no” bet grows likelier by the day.

Tonight, two pitchers whose records could use a little polishing match up as the St. Louis Cardinals welcome the Miami Marlins to Busch Stadium to open a three-game series. Cardinals hurler Adam Wainwright has not picked up a win since May 20, while Pablo Lopez’s win in his most recent start last week was his END_OF_DOCUMENT_TOKEN_TO_BE_REPLACED