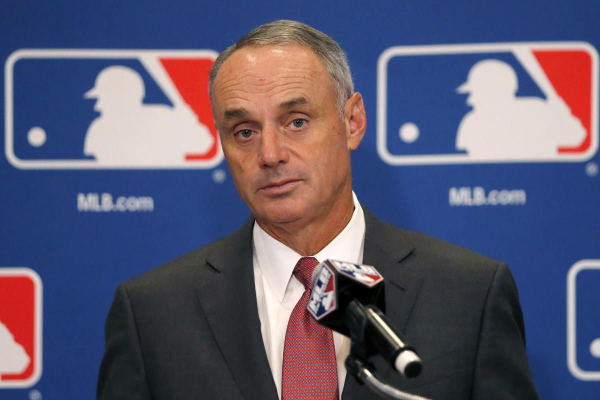 In the latest swing of emotions in discussions to move forward with a 2020 Major League Baseball season, it appears like this could be the most positive news we have seen in quite some time. Now, the MLB owners approved a plan they deem fit to the present to the players of the league.

On Tuesday, MLB commissioner Rob Manfred plans to unveil the return-to-play proposition that would have a starting point of teams playing in their home stadiums by early July. The meeting between MLB and the Major League Baseball Players Association will set the tone for what both sides believe a heated and ongoing discussion.

Although MLB could really elevate itself in the national spotlight as the only one of the four major sports to play during the coronavirus pandemic, there will be immense measures needed to account for with the players’ health being such a point of emphasis.

One source close to the situation said, “Money is at the heart of the return.” Owners are worried they could lose even more money with no fans in the stands during this whole ordeal. On Monday, owners agreed to a plan that would include a 50-50 revenue split with the players.

Since MLB is the only sport in the United States that doesn’t have a salary cap, a straight revenue split would have been unheard of in common times. The ability to work out the finances in this deal could ultimately be the difference between playing this season or 2020 being a blank line in the MLB record books.

MLBPA executive director Tony Clark said that “a system that restricts player pay based on revenues is a salary cap – period.”

“This is not the first salary-cap proposal our union has received. It probably won’t be the last,” Clark said. “That the league is trying to take advantage of a global health crisis to get what they’ve failed to achieve in the past — and to anonymously negotiate through the media for the last several days — suggests they know exactly how this will be received.”

Not only are the finances in question, but MLB players are very concerned about testing and ensuring the stadiums and clubhouses will be safe working environments. Washington Nationals relief pitcher Sean Doolittle went on Twitter Monday to voice his concerns about not only his and the other players’ safety, but also the safety of the players’ families.

During these negotiations, both sides will be in heavy contact with the government and the medical field to ensure everything possible is being done to ensure everyone’s safety.

When the two sides meet on Tuesday, there will be additional subject matters that need some tending to. Some of those important subjects include:

The season is proposed to begin on Fourth of July weekend.

If any ballpark is not available because state or local officials haven’t approved the resumption of play, Manfred told owners that he would move teams to another city to play their home games. California Gov. Gavin Newsom, who previously said he would shut down large event gathering in his state, has spoken with Manfred about the situation.

“We won’t do anything that’s not consistent with state guidelines,'” Newsom said. “We certainly look forward to Major League Baseball and all sports resuming, but again, the question is when. And that will be determined on the basis of public health and public safety and the spread of this virus.”