MLB Eyeing Return To Diamond As Early As May 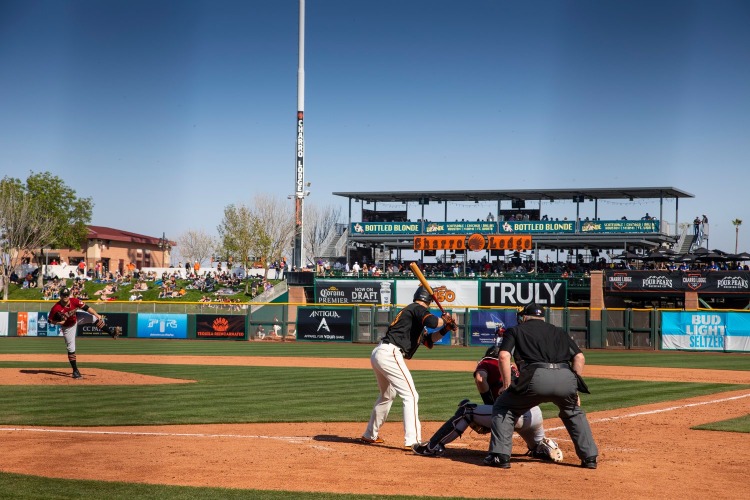 Boosted by the backing of federal officials, Major League Baseball and MLB Players Association are currently working on a plan to start the season as early as May. While nothing has been made official, reports say there’s a growing belief that baseball could safely operate under strict conditions amid the coronavirus pandemic.

This plan for a May return would centralize Major League Baseball in Arizona, where all 30 teams would utilize the 10 spring training facilities and Chase Field, home of the Diamondbacks.

For this particular plan to work, players, coaches, and other personnel would be sequestered in hotels and only allowed to travel between their respective hotel and designated baseball stadiums.

According to reports, federal health officials from the National Institutes of Health and the Center for Disease Control and Prevention have shown support for the plan so long as strict isolation is adhered to.

While the current focus is on a May Opening Day, many believe a June start date is more likely because of the number of obstacles facing professional baseball. However, an agreed deal between the MLB and union would place the sport on the path to an earlier return than many expected.

Reports also suggest that a positive coronavirus test would not necessarily mean a league-wide shutdown. Due to expanded rosters, isolation, and the need for abundant testing, games could continue in the face of a small outbreak.

Stumbling Blocks to May Start Date

While there’s an increasing belief that we could see the return of baseball after a two- to three-week training camp period in May, the potential stumbling blocks are significant.

First and foremost, there’s a basic need for the number of available coronavirus tests to grow rapidly before players take the field in any capacity. This is a steadfast prerequisite for the MLB’s plan, both for public health and to avoid the pushback received by players in other sports.

Nearer to the start of the coronavirus outbreak in the United States, the NBA and its players were criticized for using tests when supply was extremely limited, and many people showing symptoms were unable to get tested. This is something baseball is keen to avoid.

Another daunting obstacle is convincing players to leave their families amidst the pandemic for a period that could extend to 4.5 months. While many expect a skeptical response from players on this matter, MLB and union leaders are hoping the prospect of getting paid is enough to convince all parties involved.

Finally, the league has not yet set the plan in motion.

“We have not settled on that option or developed a detailed plan,” the MLB said in a statement Tuesday. “While we continue to interact regularly with governmental and public health officials, we have not sought or received approval of any plan from federal, state and local officials, or the Players Association.”

While we could see significant changes to the game of baseball in this proposed shortened season, such as seven-inning doubleheaders, one thing will remain the same: a champion will be crowned.

In the event baseball does have a 2020 season, two familiar teams stand above all others as favorites to win the World Series.

With odds of +380, both the Yankees and Dodgers sit atop the list of contenders. Those heavyweights are followed by the Astros, who own odds of +750 amid the cheating scandal that dominated talk during the brief spring training period.

The young, talented Atlanta Braves own the fourth-best odds of +1400, and they’re followed by the power-hitting Twins at +1600. Rounding out the list of top contenders are the Rays and the defending champion Nationals, both of whom own odds of +1800.