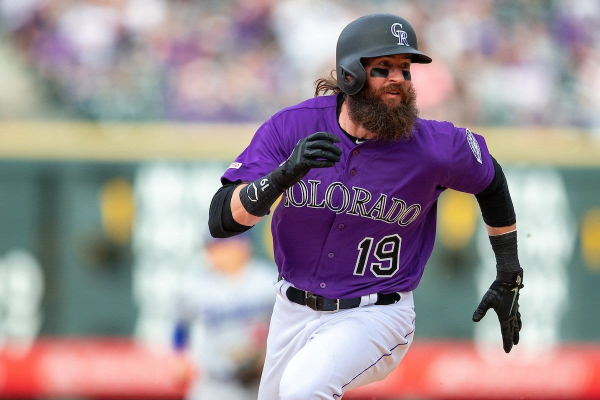 Monday night features a matchup of NL West foes when the Colorado Rockies (40-37) travel to AT&T Park to take on the San Francisco Giants (33-43). The NL West is all but wrapped up as the Rockies are in second place but 13 games behind the Los Angeles Dodgers. San Francisco sits in last in the division, 19.5 games back at this point. Despite the lopsidedness of the division, though, the Rockies are tied for the second Wild Card, while the Giants are six games out.

While we still have over half of the season left, the Rockies know that every game will be valuable down the stretch. The matchup for this one will feature Jon Gray (7-5, 4.18 ERA) for the Rockies against the Giants’ Drew Pomeranz (2-7, 7.09 ERA). First pitch for this matchup is scheduled for 10:05 pm ET.

The moneyline for this one comes in at the Colorado Rockies -130 and the San Francisco Giants +120. The over/under for total runs scored comes in at 8.

On the pitching side, it is San Francisco that holds the slight edge. They rank 20th in the majors with a 4.70 team ERA (4.11 at home). For the Rockies, they come in at 28th overall with a 5.14 ERA; however, if you look at them away from Coors Field, they have actually been rather good with a 3.98 ERA.

After being swept over the weekend by the Dodgers, the Rockies desperately need a reversal of fortunes and will look to Jon Gray to serve as the stopper of their current skid. On the season, Gray is 7-5 in 15 starts with a 4.18 ERA, 1.37 WHIP and opponents are hitting .261 against him. In 90.1 innings, he has allowed 88 hits, 42 earned runs, 13 home runs and has struck out 97 versus 36 walks. In his last outing, a 6-4 win over the Diamondbacks, Gray went six innings, allowing six hits, two walks and two runs (one earned) while striking out four.

In what has been a very frustrating season thus far, the Giants probably acknowledge that they will likely be sellers instead of buyers, with players like Madison Bumgarner, Will Smith, and others possibly on the move. They are still looking to be competitive and will turn to Drew Pomeranz to try to start off this series on the right foot.

Offensively, it doesn’t get a whole lot better. San Francisco’s offense has been rather anemic thus far with Kevin Pillar being their best hitter. Nothing against Pillar, but he is only hitting .253/.280/.425 on the season. Still, he leads the team in home runs (10), runs batted in (37) and runs scored (39), none of which are particularly high totals at this point in the season. In his career against Gray, though, he is 2 for 6 with a solo home run.

Yes, in his career, Drew Pomeranz has pitched well against the Rockies (2-0 with a 1.89 ERA). Yes, Gray has not pitched well in San Francisco (4.55 ERA). No, I don’t put too much stock into either of these stats. Rather, I have to look at what these two have accomplished lately, and the 7.09 ERA of Pomeranz is rather telling. He has struggled all season, and it doesn’t really seem to be getting better. Throw in the fact that Colorado has a fearsome lineup, and I think the smart bet in this one is Colorado. While Gray is not invincible, I think the Giants’ weak offense will hide some of his flaws. For my money, I am taking the Rockies at -130.