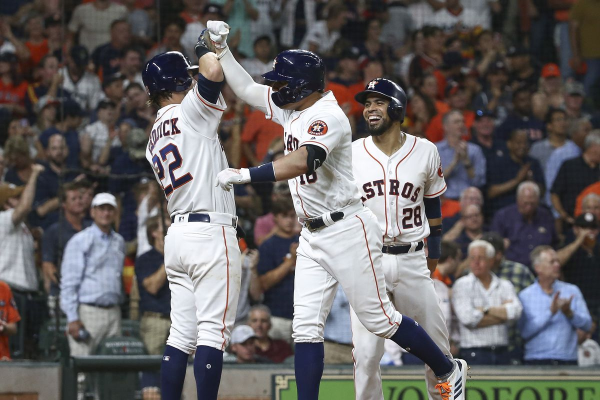 Tuesday night features an AL West showdown when the Oakland Athletics (57-44) take on the Houston Astros (65-37) at Minute Maid Park. This is the second of a three-game series as the Astros took the first game in convincing fashion, 11-1. For the A’s, not only is every game important because they are trying to close the gap in the division but also because they are currently sitting in the second Wild Card spot, only a game ahead of the Tampa Bay Rays.

For the Astros, they would love to extend their division lead as they approach the trade deadline. The pitching matchup for Tuesday will feature Mike Fiers (9-3, 3.64 ERA) going for the A’s against the Astros’ Wade Miley (8-4, 3.25 ERA). First pitch for this contest is scheduled for 8:10 pm ET.

The moneyline for this one comes in at the Oakland Athletics +147 and the Houston Astros -157. The over/under for total runs scored is 9.5.

Oakland Looking To Cut Into Lead

Coming into this series, the Oakland Athletics had a chance to cut the division deficit down to just 2.5 games if they were able to sweep the Astros. After having dropped the first game, they are looking to salvage the last two. To try to get a win on Tuesday, Oakland will send righty Mike Fiers to the mound.

On the offensive side, Ramon Laureano has been one of the hottest Oakland hitters over the last month. In that time, he is hitting .325/.387/.725 with eight home runs, 16 runs batted in and 22 runs scored. Also over the last month, Oakland has hit for a ton of power as Laureano (eight), Matt Chapman (four), Matt Olson (eight), Mark Canha (six) and Marcus Semien (five) all have multiple home runs. In their careers, both Khris Davis and Matt Chapman have home runs against Astros’ starter Wade Miley.

Over the last 10 games, the Astros have been rolling to an 8-2 record, and they have won six straight games coming into play on Tuesday. Trying to keep the streak alive will be lefty Wade Miley. On the season, Miley is 8-4 in 20 starts with a 3.25 ERA, 1.13 WHIP and opponents are hitting .220 against him.

On the offensive side, the Astros have definitely been hitting their stride lately. In their last five games, they have been averaging 6.4 runs per game. One of the most impressive displays has been from both Yuli Gurriel and Yordan Alvarez lately. In the last 30 days, Gurriel is hitting .394/.430/.915 with a whopping 14 home runs, 31 runs batted in and 22 runs scored.

For Alvarez, the rookie has hit .351/.415/.662 with five home runs, 21 runs batted in, and nine runs scored in that same time frame. Throw on top of that players like Alex Bregman, Jose Altuve, George Springer, and Michael Brantley, and this team is very deep offensively. To make matters worse for AL West teams, Carlos Correa is due to return Friday.

Both of these teams have been fantastic this season, and both Mike Fiers and Wade Miley have pitched well for their respective teams. Ultimately, though, this comes down to the fact that the Astros have just been rolling lately, and their offense seems to be clicking. Throw on top of that the fact that Fiers is 1-2 with a 6.15 ERA in his career against his former club, and the Astros seem like they could have his number. Don’t get me wrong, Fiers has pitched well lately (he has the second-lowest ERA at 2.44 since the end of April), but I like the chances of Houston playing at home in this one. They are certainly the favorites, but I am taking Houston at -157 in this one.