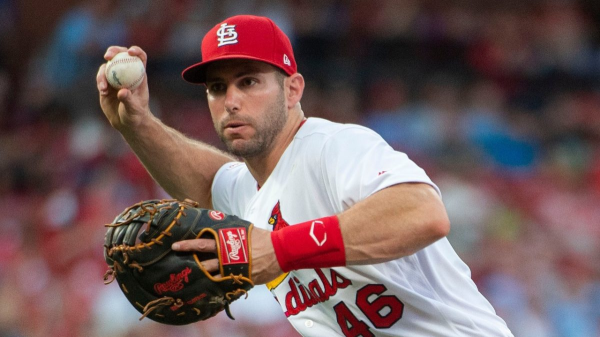 It is a National League Central showdown when the Chicago Cubs (56-49) travel to Busch Stadium to take on the St. Louis Cardinals (56-49) on Tuesday. This historic rivalry is only enhanced by the fact that the two teams are tied for the lead in the NL Central heading into the series. With Milwaukee only a game behind the two of them, every game is important for these two clubs and this should make for quite a three-game series.

The pitching matchup for this one features Yu Darvish (3-4, 4.54 ERA) pitching for the Cubs against the Cardinals’ Adam Wainwright (7-7, 4.63 ERA). First pitch for this contest is scheduled for 8:15 pm ET.

The moneyline for this game features the Chicago Cubs at +100 while the St. Louis Cardinals come in at -110. The over/under on runs scored is set at 9.

On the pitching side, it is once again the Cubs that hold a small advantage. They rank sixth in the majors in earned run average with a staff ERA of 4.04 (4.79 on the road). For the Cardinals, they come in ninth in team ERA at 4.15 (3.50 at home).

Cubs Looking To Get Back On Track

The Cubs have been on a bit of a skid over the last week as they are 2-5 in their last seven games. Heading into the series at Busch Stadium, they are hoping a win on Sunday against the Brewers and an off day Monday can help them reset.

On the offensive side, Kris Bryant has had a really nice season this year. He is hitting .294/.399/.548 with 21 home runs, 51 runs batted in and 79 runs scored. Javier Baez and Anthony Rizzo have also been among the trio of top hitters for the Cubs.

Despite dropping two of three to the Houston Astros over the weekend, the Cardinals have been playing some good baseball of late. In fact, prior to the loss on Saturday, the Redbirds had won six in a row and nine of their previous 10.

They will try to keep this momentum going against their heated rival and will look to Adam Wainwright to try to get the first win of the series. On the season, Wainwright is 7-7 in 19 starts with a 4.63 ERA, 1.40 WHIP and opponents are hitting .266 against him. In 103 innings, he has allowed 103 hits, 53 earned runs, 13 home runs and has struck out 98 versus 41 walks. In his last outing, a 14-8 win over the Pirates, Wainwright went five innings allowing five hits, four walks, and four earned runs while striking out five.

On the offensive side, Paul Goldschmidt has finally looked like the player the Cardinals hoped he would be when they traded for him. In just the last week, he is hitting .345/.387/.966 with six home runs, 13 runs batted in and nine runs scored.

Also hitting well in that time has been Kolten Wong. Even though he hasn’t hit for as much power as Goldschmidt, he is hitting .346/.433/.577 with a home run, four runs batted in and three runs scored. Unfortunately for St. Louis fans, the Cardinals’ offense has been a bit inconsistent but will hope to rise to the occasion against the Cubs.

When it comes to a Cubs-Cardinals rivalry, a lot of times, you can throw the numbers out of the window. These two teams and their fan bases live to beat one another. Still, on the surface, I have to lean towards the Cubs in this one. Even though they have played inconsistently at times, I still like the offensive firepower of the Cubs better, and Adam Wainwright’s best days are certainly behind him. Yu Darvish has certainly not lived up to his contract with the Cubs, but he has been surprisingly solid since the All-Star break. All in all, for my money, I am taking the Chicago Cubs at +100 in this one.