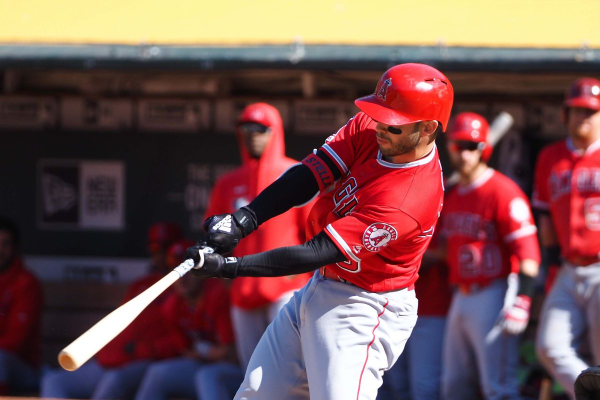 Thursday night features the first of a four-game set between AL West rivals as the Oakland Athletics (43-38) travel to Angel Stadium to take on the Los Angeles Angels (41-40). Both of these teams are coming off of sweeps in short two-game interleague series with the NL Central. For the A’s, it was a sweep of the St. Louis Cardinals while the Angels downed the Reds for two games. Now squaring off against one another, these two playoff hopefuls (Oakland is 1.5 games out of the Wild Card while the Angels are 3.5 games back) will go toe to toe. In this matchup, the A’s will send Tanner Anderson (0-2, 4.20 ERA) to the mound to square off with Griffin Canning (2-4, 3.88 ERA). First pitch for this matchup is scheduled for 10:07 pm ET.

The moneyline for this contest is set at the Oakland Athletics +140 and the Los Angeles Angels -155. The over/under for runs scored is set at 9.5.

With the division not out of the question and the Wild Card very much alive, the A’s know that at the halfway point of the season, every win can be crucial down the stretch. With that in mind, they will send Tanner Anderson to the mound on Thursday searching for his first win of the season. On the year, Anderson is 0-2 in 3 starts with a 4.20 ERA, 1.13 WHIP and opponents are hitting just .220 against him.

In 15 innings, Anderson has allowed 13 hits, seven earned runs, two home runs and has struck out 12 versus four walks. In his last outing, a 5-3 loss to the Rays, Anderson went four innings, allowing seven hits, one walk, and three earned runs while striking out four. He will look for a stronger outing Thursday.

Offensively, Matt Chapman had a nice day on Wednesday in the finale against the Cardinals and will look to keep it going against the Angels. In the game against the Redbirds, he went 2 for 4 with his 19th home run of the season. All in all, the third baseman is hitting .269/.353/.534 with 19 home runs, 44 runs batted in and 53 runs scored. He leads the team in each of those last three categories (technically tied with Marcus Semien for runs scored). Still, Chapman has been very productive this season and will look to keep it going Thursday.

Angels Trying To Stick Around

As always, all discussions of the Angels’ offense start with Mike Trout. The outfielder is hitting .303/.461/.629 with 22 home runs, 56 runs batted in and 63 runs scored. Still, there are others who have performed quite well this season. One of those players is second baseman Tommy La Stella. He has quietly put together a nice season and is even trying to make a run at an All-Star nod.

On the season, La Stella is hitting .296/.347/.502 with 16 home runs, 44 runs batted in and 47 runs scored. Throw in players like Shohei Ohtani, Justin Upton, and even Albert Pujols, and there is some firepower in the Angels’ lineup.

This one seems like a lot more of a toss-up to me than the moneyline indicates. The Angels seem to be significant favorites, likely because of the pitching matchup, but I can’t say that I am overly enamored with how Canning has pitched as of late. Ultimately, I could see both offenses getting going in this one early and it becoming a bullpen game late. With that in mind, I like the chances of the A’s a little more if that scenario plays out. Throw on top of that the fact that they have the more favorable moneyline at +140, and that is where I am putting my money.