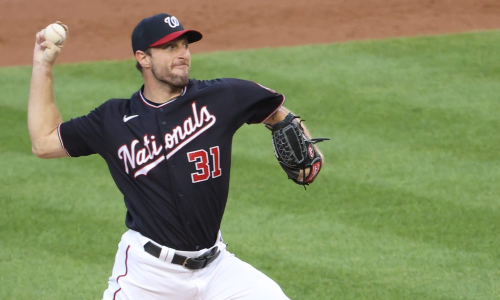 Sometimes things look better on paper than they do in real life. That has to be the case Saturday as the Nationals host the Mets with a starting pitching matchup of former Cy Young Award winners.

This is the defending World Series champs hosting a team that had playoff hopes as recently as a few days ago, but it’s all unraveled for both teams. And that’s somewhat true for Rick Porcello and Max Scherzer, neither of whom have had a year to remember. That said, none of that matters when it comes to betting the game. And that’s why the paper really does look better…because this game represents an opportunity to win some paper.

So how on Earth are the Nats a sizable underdog with Scherzer on the hill? It’s a fair question, without an obvious answer. Normally, when I see a number like this and it feels fishy, I stay away. Something must be up, right? Well, maybe not. The Nationals have the second worst record in the National League this year, and Scherzer has not been himself. He’s a run of the mill 4-4 with an ERA of 3.67 and a WHIP of 1.67. It has not been a Scherzer like year. He’s 36 years old, so maybe time is finally catching up, but all that matters here is this one game. I have a feeling, in his final start of 2020, Scherzer has something up his sleeve. He’s coming off a performance where he shut down the Marlins over 5 2/3 innings, allowing no runs and striking out 6. Also, that game was a 7 inning game as part of a doubleheader. So is this one because of a postponement on Friday. That means a guy like Scherzer can rear back and really let it rip, knowing the game is condensed. I like Scherzer to keep the Mets down and keep the scoring low. You won’t get value like this often.

On the other side is Porcello, a decorated pitcher in his own right. He has fallen on even harder times, with a 1-6 record and an ERA of 5.46 this year. But don’t get too caught up in numbers in a shortened season. Porcello shut out the Braves in his last outing over 7 innings, which is a big boy performance. He also faced the Nats twice earlier in the season and pitched well both times. He gave up a total of 3 runs over a combined 13 innings in those two starts. These two pitchers have both shown some recent upside, they both have great resumes, and both will be trying to finish the season on a high note.

The fact that there is now a doubleheader for these two teams Saturday affects the game. Lineups tend to be a little less powerful because managers will hold some of their players out of one game so they can play them in the other. This, again, plays into the hands of the two veteran starters, who might get a break on who they need to face.

All the previous notes are heading to the same conclusion. Take the under! It’s not easy to do with a small number like 8.5, but that’s because Vegas is begging you to take the over. You have two strong starters and only 7 innings to play. Grit your teeth and trust that these two teams just want to finish the season and go home. They won’t draw this one out.

If you want to play the money line, Washington is the pick. I’m a little hesitant because +188 seems too good to be true with Scherzer on the mound, but the Nats have been respectable of late, having won 4 of 6.