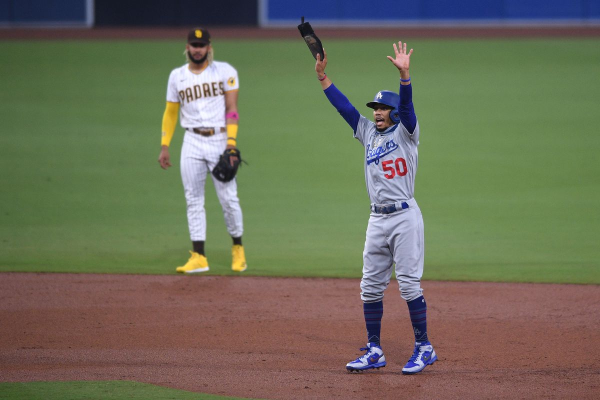 Los Angeles is up 2-0 in the series after holding on yesterday, in one of the most exciting playoff games in recent memory. San Diego is making these playoffs very fun so it would be a shame if we have to say good bye to them tonight. They might be able to extend the series, but Los Angeles has never lost a five game series in which they had a 2-0 lead.

As a fan, I really hope we get a few more ballgames in this big brother vs. little brother matchup. Equally fun is the bad blood between these two squads, fueled by Manny Machado and his strange double-standard approach to what is acceptable on a ballfield.

Right now L.A. has not announced its starting pitcher yet. As they are up in the series, they can be more flexible and hope for the best. They have a lot more margin for error. San Diego is pinning a lot on rookie Adrian Morejon, who has not yet pitched in this series.

Morejon has pitched twice in these playoffs, getting into a couple of games against St. Louis last series. There is some optimism there as Morejon has looked good, giving up just one hit over a couple of innings. He can get a few strikeouts but is not the most dominating of pitchers. He has pitched once against the Dodgers this season season – 2 innings, 1ER and 3Ks – and while that’s pretty good, it’s certainly not a lot to go on. San Diego says Morejon could give them as many as 5 innings, but the most pitches he has thrown in a game is 41 this season. Personally, I’ll have to see it first, especially against a stacked Dodger lineup.

L.A. is loaded with guys who can give them a few dynamite innings, whether they are as starters or not. I think we might see Dustin May get the ball and even though he might be off his regular routine, he gave the Dodgers a couple of great innings in game one and could give them a couple more now. Victor Gonzalez is another arm that could get the nod if L.A. would prefer to go with a lefty to start, though this is doubtful because the Padres are righty heavy at the top of their lineup.

When the line drops we will see L.A. favoured. Morejon has promise but not enough to shift the market away from the Dodgers. Both teams have strong lineups but Fernando Tatis Js. has not been as good in this series. When he got robbed of that homer by Cody Bellinger, it had to deplete some of his boundless energy. This feels like a sweep now.

L.A. might not be much value here though. Take them if you can get -140 or better, otherwise roll the dice with San Diego.

These were two of the top scoring teams in the league during the regular season. Two games in this series have seen one under and one over, so not much to go on there. The key for this one is keeping the ball in the park. Expecting a train of relievers with elite stuff, I think we see the hitters struggle to get much going, especially seeing a different arm each time they take their at-bat. This could give us a low scoring game.