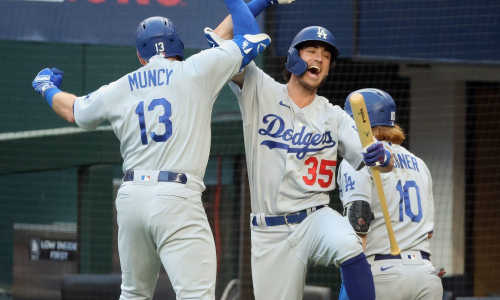 Sometimes desperation can be a good thing. Down 2-0 the Dodgers were up against it and came out swinging, scoring 11 runs in the top of the first inning of game three en route to the easy win. With the series tied 2-1, they can take a deep breath and try and reset themselves from here.

The 11 run outburst should not have been too much of a surprise given the Dodgers finished the season as the top-scoring team in the Majors, and with the most home runs. It was still more than they had scored during the first couple of games of the series, where not much had gone right, including back spasms for Clayton Kershaw that pushed him off schedule (likely to today).

Atlanta is up 2-1 now, which is a better position than most would have predicted over the first three games of the series. Their offense can hang with L.A., but their pitching depth is not in the same class. They are having to go deeper and give an opportunity to some untested arms the rest of the series.

Bryse Wilson is getting the ball for the Braves to start game four. He only pitched in 6 games during the season, making two starts in the last couple of weeks. He was 1-1 in those games including a nice performance against the Marlins but, he has not pitched in these playoffs yet, which gives you an idea of where he is in the pecking order for Atlanta. The righty’s inexperience makes handicapping a challenge.

As for the Dodgers, the intel at the moment is saying that Clayton Kershaw will be ready to go for game four. That is good news on the surface but it is hard to have a lot of confidence given back ailments are tricky and his playoff numbers are spotty throughout his career. The odds of him being good are medium at best, and the odds of him being good and gutting out significant outing even lower. That does not make the Dodgers a bad bet, just one that is hard to have confidence in.

Assuming he gets announced early enough I will be looking to fade him. The value should be in the plus range for Atlanta and I think Wilson can be as good as a diminished Kershaw.

Total: Off (predicted at 9)

With the offensive explosion by L.A. in game three that makes two overs in three games. With the fade of Kershaw, I am expecting a game more like the 8-7 contest we got in game two of the series. Wilson might have a little success early but these were the top two offenses in the game. We will see why. This one might be decided in the final at-bat but we should probably cash the over ticket by the 7th inning.

After extending their hot and San Diego’s cold streak, the Seattle Mariners will be looking to leave Petco Park with a two-game sweep as they take on the Padres this afternoon. Yesterday, the Mariners pounded out a dozen hits and plated eight runs, and Chris Flexen pitched 6.2 shutout innings to collect his third straight END_OF_DOCUMENT_TOKEN_TO_BE_REPLACED