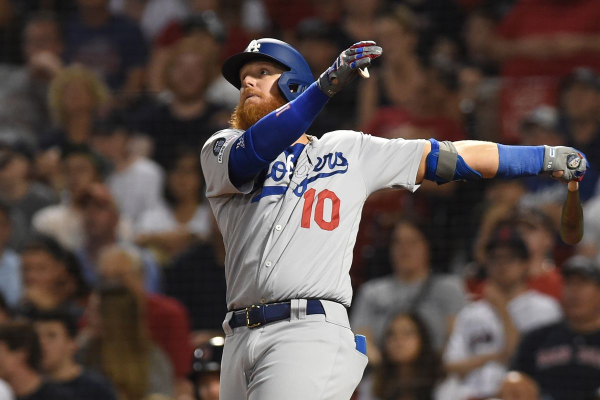 Sunday night is the rubber match of a three-game series that features a World Series rematch as the Los Angeles Dodgers (61-33) take on the Boston Red Sox (50-42) at Fenway Park. The teams split the first two games in convincing fashion as the Red Sox won 8-1 on Friday and the Dodgers won 11-2 on Saturday. It looks like it should be a showdown of pitching aces on Sunday as the Dodgers’ All-Star Hyun-Jin Ryu (10-2, 1.73 ERA) takes on the Red Sox’s David Price (7-2, 3.24 ERA). First pitch for this matchup is scheduled for 7:08 pm ET.

The moneyline for this contest is set at the Los Angeles Dodgers -104 and the Boston Red Sox -106. The over/under for runs scored is set at 9.

Offensively, both of these teams are capable of putting runs up in bunches. Boston currently ranks third in the majors in runs per game at 5.68 (5.46 at home). For the Dodgers, they come in at seventh, averaging 5.17 runs per game (4.95 on the road).

The Dodgers pretty much have their division wrapped up already, as they currently hold a 13.5-game lead over the second-place Arizona Diamondbacks. Despite that, though, as the losers of the last two World Series, they know there is a lot of work to be done. Trying to go for another win on Sunday will be Hyun-Jin Ryu.

The National League All-Star starter has gone 10-2 with a 1.73 ERA, 0.91 WHIP and opponents are hitting just .221 against him. In 109 innings, he has allowed 89 hits, 21 earned runs, 10 home runs and has struck out 99 versus just 10 walks. He definitely has a strong case at the midway point of being the National League Cy Young Award winner.

While Ryu is definitely atop the conversation of the Cy Young Award, Cody Bellinger has to be atop the National League MVP conversation. The slugger is hitting .338/.433/.695 with 31 home runs, 73 runs batted in, 71 runs scored and even has eight stolen bases. He is easily the most feared hitter not named Mike Trout at this point.

It certainly isn’t just Bellinger, though. The Dodgers are deep throughout with players like Justin Turner, Joc Pederson, Max Muncy, Alex Verdugo, Corey Seager, and even the return of AJ Pollock in the lineup.

While the Red Sox have certainly not consistently played like a team that won the World Series last year, they still find themselves with a solid 50-41 record. Unfortunately for them, though, in the AL East, that is good for just third, 8.5 games behind the Yankees. Still, at 1.5 games out of the second Wild Card, the Red Sox know they are capable of making a push towards the postseason and will look to David Price to get them going on Sunday.

This one is a tossup, and the moneyline reflects that. Both Ryu and Price are very capable of throwing up zeroes, and both offenses have the firepower to take advantage of mistakes. With that in mind, though, I have to go with the team that has been able to execute more consistently throughout the season, and that is the Dodgers. While we all understand the World Series “hangover,” the Red Sox just can’t seem to get on a roll this season. In a one-game snapshot, the Red Sox are certainly capable of winning, but for my money, I feel more comfortable taking the Dodgers at -104.