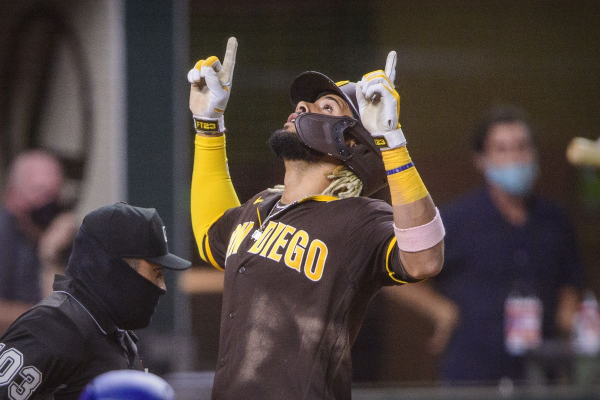 Friday night features an interleague matchup of scorching hot teams as the Houston Astros (15-10) travel to Petco Park to take on the San Diego Padres (15-12). This will be the first of a three-game series, and the first pitch is scheduled for 9:10 pm ET.

The Astros come into this meeting on a seven-game winning streak after back-to-back sweeps of the Seattle Mariners and Colorado Rockies. The Rockies sweep was four games where two were played in Houston and two in Colorado. In Thursday’s game, the Astros outslugged the Rockies 10-8.

The Padres come into this one having just swept the Texas Rangers in four games. The most remarkable part of that sweep, though, is that they hit a grand slam in every one of those four games. On Thursday, they beat the Rangers 8-7 in extra innings (and Eric Hosmer provided the grand slam).

On the offensive side, both of these teams rank in the top ten in runs scored. The Astros come in 5th overall averaging 5.25 runs per game. The Padres average 5.12 runs, which is 8th in MLB

On the defensive side, it is once again the Astros who hold an advantage. They are allowing opponents to score just 4.12 runs per game (ranks 7th in MLB). The Padres rank 16th overall, allowing 4.62 runs per game.

When you think of how many injuries the Astros have endured this season, it is remarkable to think they are 15-10 overall. This week alone, they lost designated hitter Yordan Alvarez for the season (knee surgery) and put third baseman Alex Bregman on the injured list after he left Wednesday’s game with a hamstring injury.

Throw on top of that the fact they have already been without Michael Brantley, Justin Verlander, Roberto Osuna, and others, and it is remarkable Houston has found a way to run off seven in a row.

While the injuries have added up, they have gotten some solid play out of others. Carlos Correa is currently batting .315/.396/.472 with three home runs, 14 runs batted in, and ten runs scored. Also, first baseman Yuli Gurriel is off to a hot start hitting .296/.364/.541 with five home runs.

While some of their stars’ absence has been frustrating, one encouraging sign has been Jose Altuve. The 2nd baseman has struggled mightily this season but has gotten two hits in each of the last two games.

On the mound for the Astros Friday will be Lance McCullers Jr. In his last start, McCullers was solid going 5.2 innings, allowing two earned runs and striking out 7 in a 3-2 Astros win.

Padres Winning With The Long Ball

To say that the Padres have been on a bit of an offensive tear might be an understatement. They have set an MLB record with four straight games with a grand slam, and their offense is roaring right now.

Shortstop phenom Fernando Tatis Jr powers San Diego. This season he is hitting .312/.385/.706 with 12 home runs, 29 runs batted in, and 26 runs scored. He has also added six stolen bases to boot. Tatis is a frontrunner for National League MVP and makes the argument of being one of the best in the sport today.

On the mound for the Padres on Friday will be Garrett Richards. On the season, Richards is 1-1 with a 3.45 ERA, 1.22 WHIP, and 21 K’s in 28.2 innings. In his last start, a 5-4 loss to the Diamondbacks, Richards went seven innings allowing six hits, two earned runs, and struck out 2. He will look to keep it going on Friday.

Should Be A Great Series To Watch

With how well San Diego and the Astros have been playing, this wager is a bit of a toss-up for me. I give Houston the edge in starting pitching, but I worry that the sheer number of injuries will catch up to them. I wouldn’t blame you regardless of which team you took, but for my money, I am taking the Padres to win at home.

Tonight, two pitchers whose records could use a little polishing match up as the St. Louis Cardinals welcome the Miami Marlins to Busch Stadium to open a three-game series. Cardinals hurler Adam Wainwright has not picked up a win since May 20, while Pablo Lopez’s win in his most recent start last week was his END_OF_DOCUMENT_TOKEN_TO_BE_REPLACED