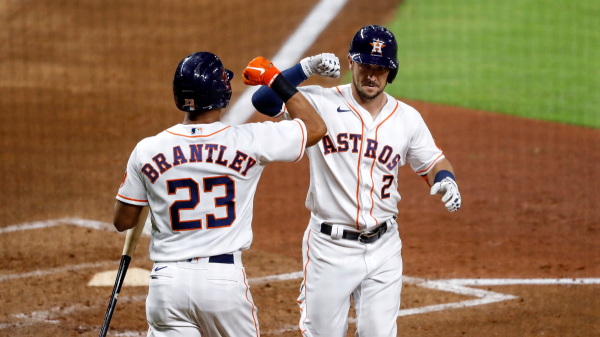 These AL West division mates are very familiar with each other. Houston was the favourite coming into the season, but their pitching was decimated by injuries enabling the A’s surged ahead and they never looked back. Now we have this series at a neutral site so the advantage of winning the division has been somewhat nullified though. (They are playing in L.A. at Dodger Stadium)

The pitching never returned to health for Houston so they slumped into the playoffs, lucking into playing Minnesota, the team on the worst playoff run in the Majors. They beat them two straight to advance, reminding us that writing them off might have been a little premature.

Oakland was pushed harder against the Chicago White Sox. They lost the opener, but beat Chicago two straight to advance. Bassitt was the game two starter but has leapfrogged to the top of the rotation for this series. The extra rest made that possible. Oakland is also playing shorthanded for the rest of the season. They are without 3B Matt Chapman. Their best all-around player.

Greinke was the ultimate veteran in his lone playoff start this season. It looked like Minnesota was going to rough him in the first inning of the first game, but he was unphased and was critical to getting the team the win. He made two starts against the A’s this season and the teams split 1-1 in those games – Oakland had the edge for the season going 7-3 vs. Houston though. Greinke has had really good success against current A’s. They are batting just .214 against him for his career and the guy who has done some damage is Khris Davis, but he has been lost all season.

Bassitt made three starts against Houston this year, and they included his best and his worst of the season. The best was seven shutout innings, and the worst his shortest start of the season, just three innings. His career does not go back like Greinke’s though so there is a little less to go on here. These pitchers are actually pretty similar as they are not going to dominate with big strikeout numbers.

I see these pitchers as cancelling each other out for this one. I think they will both be solid and give their teams about six innings. Shifting things to the lineup I lean to Houston. Those bats have been in so many big games and even though they did not light up the Twins they got key hits when they needed them. I would have priced this one about even so Houston becomes the play with the extra value and experience.

Starting with a look at the season series we see that the under cashed in 7 out of 10 games. That is not a surprise because both offenses failed to hit to their potential this season, especially Houston’s. There is a lot of power in these lineups though so if the pitchers are going to let the ball be put into play it could be a problem. Both starting pitchers have pitched to more unders this season so that is the way to lean for this one. The total is low but not the 6.5 or 7s we saw in some series last week when the top aces were facing off. This number does not have a lot of margin for error but the under is the play here.