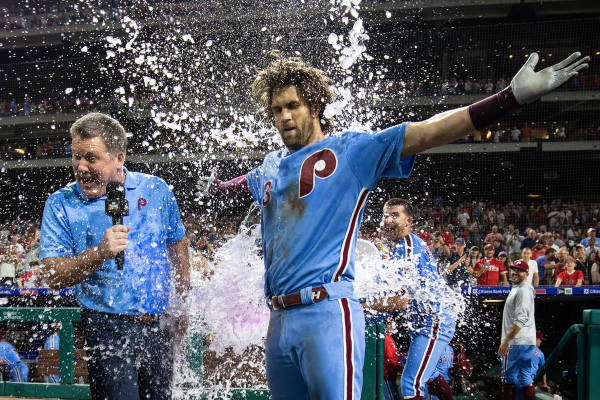 On Thursday night, the Philadelphia Phillies had one of their most exciting moments in the last decade. After falling behind 0-2 in the count and then working it back to even, Bryce Harper absolutely crushed the ball into the second level for a walk-off grand slam.

The Phillies began the eighth inning down 5-0 to the visiting Chicago Cubs. Flash forward to the ninth inning, and the Phillies produced two runs to make it a 5-3 game, leaving the bases loaded for their $300 million rightfielder.

You knew the ball was demolished as soon as it left the bat. The ball traveled at a speed of 113 mph as it went all the way to the moon and landed just short of the third-level deck.

Harper followed up the home run with an epic victory lap around the bases. Slowly high-stepping his way to first base and then sprinting his way home. It took Harper 19.3 seconds to round the bases, his second fastest on the season.

The Phillies had been searching for a moment like this for quite some time. Ex-Phillies player John Kruk who was announcing the broadcast had the perfect reaction to the blast. He shouted a quick “OH MY GOD” shortly after the ball left Harper’s bat.

Can You Expect The Phillies To Make A Run Now?

For a team that has been constantly hot and cold all season long, it’s hard to say where the Phillies will go from here. The team hopes that an electrifying moment like this will be the start of a playoff push.

You may be wondering if this is the time to place a wager on the Phillies to win the World Series. With 41 games left and a red-hot Harper, it’s not completely out of reach.

The team certainly seems to be playing with a chip on its shoulder after replacing hitting coach John Mallee with former manager Charlie Manuel. Manuel, who led the team to a World Series victory in 2008 and then a World Series loss in 2009, hopes to help the team reach that grand stage once again.

After sweeping the Cubs in a three-game series at home, the Phillies are currently one game behind Chicago in a race for the second Wild Card spot entering the weekend. The Brewers are also one game back, while the Mets sit two games behind Chicago.

Where Do The World Series Odds Currently Sit?

The Phillies currently have 35/1 odds to win the World Series. While they’re definitely not expected to make it into the playoffs and cause significant damage, things seem to be trending upwards for the franchise at the perfect time.

If you’re feeling optimistic about the team and have $100 laying around, there’s an off-chance of you turning that $100 into $3,500. Not a bad risk for a huge reward.

Any experienced bettor will tell you to only risk an amount of money that you’re willing to lose. In this case, the Phillies probably aren’t going to win the World Series, so don’t expect to cash in on a 35/1 reward.

With that being said, placing a wager like this is similar to playing a scratch-off. Chances are you won’t make any money, but if you do, it’ll definitely be a substantial payday.

A Lot Of Baseball Still To Be Played

With under two months left in the regular season, the Phillies hope to keep on rolling and continue their success against the Padres in a three-game series starting on Friday night. This series is likely to be a telltale sign of whether or not the team will stay hot or go back to their inconsistent ways.

A chance to take the division title has practically been diminished for the Phillies (eight games back), but the two Wild Card spots are still very attainable. There’s not much room for error though, as seven teams are all within four games of each other in this race.

Expect Harper to keep the same energy he had in the Cubs series. The former MVP posted three home runs in the past two games, including the monster grand-slam walk-off.

Phillie fans would love nothing more than to see their team return to the playoffs and fight for a chance to play in another World Series, but don’t count on them to surpass powerhouse teams like the Yankees, Dodgers, or Astros.

If you decide to take a risk and place a World Series wager on the Phils, do it at your own risk. It’s not suggested that you book a vacation with a plan to pay for it with your winnings though.