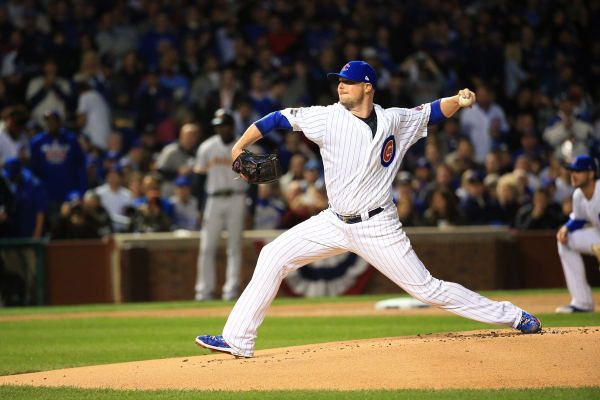 The National League Central Division title is still up for grabs, but a lot will be decided in the next few weeks. The Chicago Cubs are in Milwaukee this weekend for a three-game series, and the two teams will meet up again next weekend in Chicago. The Brewers were able to earn an important 3-2 come-from-behind win in the series opener on Friday night and will look to pull even with the Cubs with another win in this game.

Chicago has been a horrible road team all season long, and the loss on Friday night dropped the Cubs to just 19-30 away from Wrigley Field. The Cubs also fell out of first place with the series-opening loss and now trail the Cardinals by one game in the NL Central with a record of 55-48.

Milwaukee remained just two games out of first with the win on Friday night, improving its record to 55-50 on the season. The Brewers are an impressive 32-23 in games played at Miller Park. The Chicago Cubs are +105 in game two of the series on Saturday night.

The one constant for the Chicago Cubs in 2019 has been their starting rotation, and they have a few veterans leading the way. Jon Lester is one of those veterans, and he will start for the Cubs in game two of the series on Saturday night. Lester has battled injuries this season but always seems to come up with a big start when the Cubs need it the most. The veteran is 9-6 with a 3.87 earned run average this season and has yet to give up a run to the Brewers in over six innings pitched. Chicago needs this win over the Brewers, and they have the right man on the mound to get the job done in this one.

The Cubs managed just four hits in the series opener, and they know that they need to hit better to win this game. Chicago has four different players with at least 20 home runs this season, but their offense has really been all or nothing. Kris Bryant is the only starter hitting over .300 this season, coming into this game with a .302 batting average. The Cubs need to find some offense in a hurry or risk falling out of the race.

Christian Yelich is having another monster year for the Brewers, but he needs some help from his teammates. The reigning NL MVP is leading the team with 35 home runs and 78 runs batted in while also sporting a .334 batting average. Mike Moustakas has chipped in with 26 home runs this season, but guys like Lorenzo Cain and Yasmani Grandal really need to start turning things around. The Brewers are usually a much better hitting team at home than they are on the road.

The Brewers have been losing starting pitchers left and right of late, and that will force a reliever back in the starting rotation on Saturday night. Right-hander Chase Anderson has been a starter for a large part of his career with Milwaukee but hasn’t made a lot of starts this season. Anderson is 5-2 with a 3.90 earned run average this season in his 21 appearances, and Milwaukee is counting on a long outing to save its beleaguered bullpen. The Brewers haven’t been scoring a lot of runs of late, and a lot of pressure is on their starting pitching to deliver a quality start.

Expect another tight game between the NL Central rivals on Saturday night, as it has been that way for the last few seasons. There is a lot on the line this weekend, and the ballpark will be rocking for this one. Lester making the start for the Cubs will give them a slight edge, and that’s why the Chicago Cubs +105 are the right pick in this game.