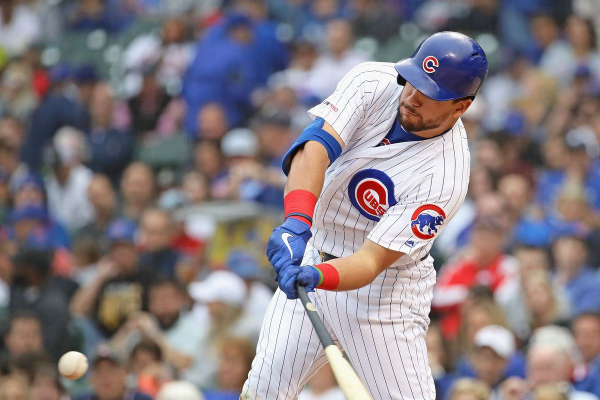 Two division leaders square off on Sunday Night Baseball when the Chicago Cubs (39-31) take on the Los Angeles Dodgers (47-24) at Dodger Stadium. For the Cubs, they technically own a tie of the division lead with the Milwaukee Brewers, while the Dodgers, who have the best record in the National League, hold a 9.5-game lead over the Rockies and Diamondbacks heading into play Sunday.

After dropping the first two games of the four-game series, the Cubs were able to get game three 2-1 behind a stellar effort from Yu Darvish. On Sunday, they will look for the series split. To do so, the Cubs will send Jose Quintana (4-6, 3.89 ERA) to the mound to square off with the Dodgers’ Hyun-Jin Ryu (9-1, 1.36 ERA). First pitch for this matchup is scheduled for 7:08 pm ET.

The moneyline for this one features the Chicago Cubs at +170 and the Los Angeles Dodgers at -200. The over/under for total runs scored is set at 8.

Offensively, these two are pretty similar. The Dodgers have the slight edge in runs per game, coming in at eighth with an average of 5.24 runs per game (5.71 at home). For the Cubs, they come in just a couple spots behind at 10th averaging 5.20 runs (5.56 on the road).

When you put it all together, it is not surprising to see these two teams once again towards the top in run differential. The Dodgers rank second with a differential of +111 while the Cubs come in tied for fifth at +61.

Cubs Look For The Split

The old adage is the key to success is to split — or go .500 — on the road while winning your home series. For the Cubs, if they can win on Sunday, that will leave them with a successful split on the series. To do so, they will look to veteran lefty Jose Quintana.

Looking at the Cubs as a team that they might run into in the playoffs, the Dodgers would love nothing more than to send an early message to the Cubs with a series win. To do so, they will look to arguably their best pitcher in 2019, Hyun-Jin Ryu.

On the season, Ryu is 9-1 in 13 starts with a 1.36 ERA, 0.80 WHIP and opponents are hitting just .205 against him. In 86 innings, he has allowed just 64 hits, 13 earned runs and has struck out 77. The most remarkable thing is how well he is keeping it in the strike zone. This entire season he has only walked five batters. He will look to keep rolling on Sunday against a strong Cubs lineup.

Over the last 30 days, though, one of the most consistent hitters for the Dodgers has been Justin Turner. While he doesn’t hit for the same power as Bellinger (only one home run and seven runs batted in over the last 30 days), he does make a lot of contact. In the last month he is hitting .347/.407/.453. With players like Bellinger, Muncy, Pederson, and Verdugo around him, his ability to get on base is significant for the Dodgers.

This one is a toss-up to me. Both teams have been solid for most of the season, and statistically, both have shown why they are at the top of their divisions. In terms of the pitching matchup, Ryu has been the more dominant pitcher this season, but Quintana is just as capable of putting together a dominant outing. For the Dodgers, Max Muncy has homered once off of Quintana in three at-bats, and Chris Taylor is 4 for 9 against the southpaw.

For the Cubs, Anthony Rizzo is 3 for 6 with a home run against Ryu, and Addison Russell has also taken the lefty deep. I could be convinced to go either way on this one, and, for that reason, I am taking the team with the more favorable moneyline. Again, it could go either way, but for my money, I am willing to take the gamble on the Cubs at +170.