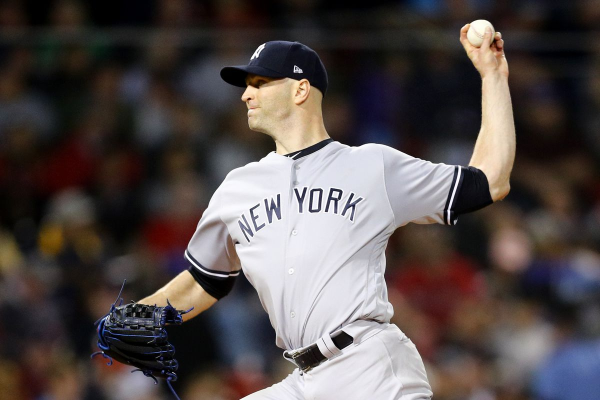 Sunday Night Baseball features one of the biggest rivalries in all of sports as the Boston Red Sox (6-15) take on the New York Yankees (13-6). This is the last of a three-game series, and the Red Sox are looking to salvage one of the three games. First pitch for this one is scheduled for 7:08 pm ET.

In the first two games of the series, the Yankees have taken care of business with their bats and defense. In the two games, they have outscored the Red Sox 21-8. On Saturday, the Yankees swatted three home runs and chased the Red Sox starter, Nathan Eovaldi, after 5.1 innings where he gave up eight runs.

At 6-15, the Red Sox find themselves in last place in the AL East, 8.5 games behind the Yankees. With the trade deadline just two weeks away, they may be one of the only teams who know they will be sellers ahead of that time.

The Yankees are currently leading the AL East by two games over the surprising Baltimore Orioles. Still, the Yankees have been impressive thus far, and, if they can stay healthy, they should make a deep playoff run.

On the offensive side, the New York Yankees have been one of the best offenses in MLB. They currently sit in second in the league in runs per game at 5.47. For the Red Sox, they come in 22nd overall averaging 4.40 runs per game.

On the defensive end, it is once again the Yankees who hold the advantage. They rank 7th in MLB in terms of runs allowed per game at 4.05. For the Red Sox, they come in dead last in MLB, allowing opponents to score an average of 6.10 runs per game.

Red Sox Looking To Salvage One Game In The Series

It is never easy to make your first career start in the majors. It is even tougher when it is the primetime national game on a Sunday Night. It is almost impossible when it is against one of the best offenses in the league. For Chris Mazza, though, that is his reality.

Mazza will be making his first start of his career after being recalled from the alternative site by the Red Sox. Technically, he has already faced the Yankees with success this year as his lone appearance. He threw in relief going 2.2 innings against New York, where he held them scoreless. Still, making the start will be entirely a different mindset, and it will be interesting to see how the youngster reacts.

On offense, the Red Sox are starting to see the fruits of their trade this offseason when they acquired outfielder Alex Verdugo (and others) for Mookie Betts. After a slow start, Verdugo is now hitting .273/.333/.515 with five home runs, eight runs batted in, and nine runs scored. In what has been a disappointing season, Verdugo has been a bit of a bright spot.

The Yankees will turn to lefty J.A. Happ as they go for the sweep on Sunday. In two starts this season, he is 0-1 with a 10.29 ERA, 2.14 WHIP, and has struck out just 3 in 7 innings. It has been a rough start thus far, but Happ is looking to bounce back against the struggling Red Sox.

Offensively, the Yankees have lost a little firepower with Aaron Judge and Giancarlo Stanton hitting the injured list and DJ LeMahieu leaving Saturday’s game with a thumb injury. Despite that, they still have plenty of offense and have seen some encouraging signs from outfielder Clint Frazier. It has only been 11 at-bats, but he is hitting .636/667/.1455 with two home runs, eight runs batted in, and three runs scored.

Granted, J.A. Happ has struggled to start the Yankees season, but the same could be said about the entire Red Sox pitching staff. Even if Happ gets in trouble early, the Yankees have the bullpen to handle a rough start, and it is likely the Yankees will score enough to keep up.

For the value, take the Yankees run line.

Tonight, two pitchers whose records could use a little polishing match up as the St. Louis Cardinals welcome the Miami Marlins to Busch Stadium to open a three-game series. Cardinals hurler Adam Wainwright has not picked up a win since May 20, while Pablo Lopez’s win in his most recent start last week was his END_OF_DOCUMENT_TOKEN_TO_BE_REPLACED