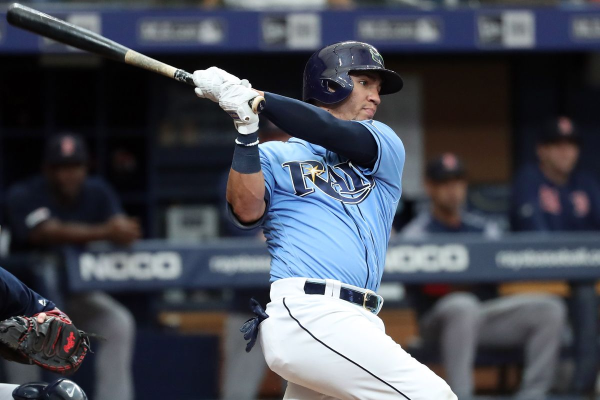 Thursday night features a battle of the bottom versus the top of the AL East as the Boston Red Sox (15-29) travel to Tropicana Field to take on the Tampa Bay Rays (28-15). This will be the first of a four-game series between the two teams. Thursday night’s game is scheduled for 6:40 pm ET.

The Red Sox come into this game dead last in the AL East as they sit 13.5 games behind the Rays. They come into this one 3-6 in September and hope to get off to a good start in the series after an off day on Wednesday.

The Rays, who hold a four-game advantage over the second-place Toronto Blue Jays in the East, also enjoyed the day off Wednesday. Despite their success, they have lost three of their last four, including a two-game sweep at the hands of the Washington Nationals. They will look to get back on track against the struggling Red Sox.

According to Fanduel, the Rays come into this one as the favorites with a moneyline of -205 while the Red Sox sit at +178. The spread comes in at +1.5 for the Red Sox, and the over/under for total runs scored is 9.

Offensively, the Rays hold the advantage in runs per game as they rank 9th overall at 4.95. The Red Sox are 16th in MLB, averaging 4.75 runs per game.

Defensively, the Rays hold a significant advantage. They currently rank 7th in the majors in runs allowed per game at 4.19. The Boston Red Sox come in dead last, allowing an average of 6.23 runs to opponents.

It is no mystery that the Red Sox have been out of postseason contention for quite some time. Despite that, they can still wreak havoc when it comes to the postseason standings as the other four teams battle for playoff spots.

To try to start the series off on the right foot, the Red Sox will turn to Mike Kickham to start this one. On the season, Kickham has gone 1-0 in 2 games (no starts). He has pitched a total of five innings with a 5.40 ERA and a 2.00 WHP. He will be going against the Rays for the first time in his career.

Despite the comfort of a four-game lead over second place in the division, the Rays would still love to beat up on the struggling Red Sox to help expand their lead even further.

To do so, they will send out lefty Josh Fleming to the mound. In his last start, a 5-4 win over the Marlins, Fleming went five innings allowing seven hits, four earned runs, and striking out two. He will look to improve on that outing against the Red Sox.

Rays Start Series With A Win

The Tampa Bay Rays are 5-1 against the Red Sox in 2020, and I have a hard time seeing their success changing in this one. Not only have the Red Sox been scuffling, but they are also relying on a guy making his first start since 2013.

Furthermore, the Rays have been solid at home, going 14-6 while the Red Sox are just 7-12 on the road. Regardless, I like the Rays in this one and am taking them in at -205. I also wouldn’t shy away from taking the Rays at -1.5 as well.

Tonight, two pitchers whose records could use a little polishing match up as the St. Louis Cardinals welcome the Miami Marlins to Busch Stadium to open a three-game series. Cardinals hurler Adam Wainwright has not picked up a win since May 20, while Pablo Lopez’s win in his most recent start last week was his END_OF_DOCUMENT_TOKEN_TO_BE_REPLACED