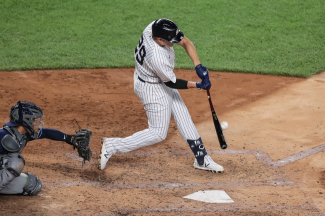 The Boston Red Sox will be taking on the New York Yankees on Sunday the 20th to cap off their three game series. The game is scheduled for 1:07 p.m. ET and will be played in Boston at Fenway Park, weather conditions are currently forecasted to be sunny.

The Yankees rallied back in the first game of the series and pushed it to extra innings before finally pulling out the victory in the 12th inning, winning 6-5. This has been one of the many storylines of the year for the Red Sox as they just haven’t seemed to get the job done so far this season. They are 14 games under .500 currently and are in last place in the American League East with a record of 19-33. The Red Sox have also lost their last 10 matchups against the Yankees, they are in danger of surpassing their most consecutive losses in a row to their rival which is 12.

If you are looking to bet on them, they have performed fairly better within their last 10 outings, having a .500 record of 5-5. They have however hit worse on average versus right handed pitchers than left, having an average of .258 versus righties this year as opposed to .273 versus lefties. Overall though, this has been the best month in terms of hitting for the Red Sox and the boost of energy from their young, hopeful to be ace, could uplift and spring the offense as it did earlier this month.

The Red Sox called on one of their top up and coming talents to take the mound Sunday. Tanner Houck will make the start, his record as a starter is 1-0 this season. Houck is one of the top prospects within the Red Sox organization, ranking 10th, he is only 24-years old. His major league debut was earlier this month where he posted his first victory as a starter, throwing 5 shutout innings and striking out 7 Florida Marlins. Of course, this is also an age old rivalry, the Red Sox sure don’t want to get swept, so look for them to come out determined if that is what they’re facing.

The Yankees are currently in 2nd place within the American League East, holding a record of 30-21, winning 9 of their last 10. They are clearly on a hot streak right now which is one of the reasons why they’ve been favored in this matchup. This year, the Yankees have been batting .254 against right handed pitchers, which is what they’ll be facing versus Houck this Sunday. This is better than the .228 average they have posted versus left handers though this year. They have raised their batting average every month and currently they are hot as nails riding this 9 game win streak.

Taking the bump for the Yankees will be Deivi Garcia, the 21-year old made his MLB debut earlier this year and has a record of 2-1 as a starter this season. His ERA is currently sitting at 3.28 and his past two starts versus the Blue Jays, he went 7 innings before they called in the bullpen for relief.

It will be hard to bet against the Yankees due to the streak they are currently on, however the youngster Deivi Garcia has not seen too many major league situations just yet, however the same goes for the Red Sox starting pitcher Tanner Houck as well. Both pitchers are very talented but inexperienced so if you’re feeling like betting on an upset Sunday, this may be one to keep an eye on. Pay attention to how the teams fare versus one another on Saturday, the Red Sox are looking to carry any kind of momentum they can into the series finale. They nearly pulled out the first game of the series versus the Yankees as well, but they have to close better.

Halting the Yankees hot streak could give the Red Sox the jolt of the confidence and momentum they need to begin turning things around. This game has bigger implications than just any other regular season matchup, there is more at stake for both sides, especially because of the history between the two.

Here are the current lines at Fanduel for Sunday’s series finale between these two historic rivals;