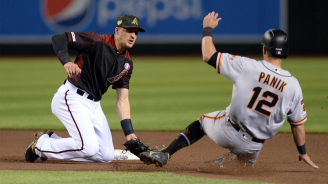 At first glance, Luke Weaver’s 7.77 ERA sticks out like a sore thumb in this one, making it look like the Giants are oozing with value in their Saturday matchup. You can get San Francisco, which will send starter Trevor Cahill to the mound for just his 4th outing of the year, for +120 on the money line and +1.5 on the run line at -165. In contrast to the bloated ERA from Weaver, Cahill has posted a 1.64 ERA, having allowed just 2 runs in 11 innings. A deeper dive shows Cahill has only given up 5 hits during those 11 innings. He’s pitched VERY well. So why is Arizona coming in as the favorite?

A closer look will reveal a few things. These same two starters faced off just last week in San Francisco and the game was scoreless into the 5th inning. In other words, Weaver was up to the task. He blinked briefly in the bottom of the 5th when Evan Longoria’s RBI double started the scoring, but this was essentially an even matchup that the Giants went on to win by crushing the Dbacks bullpen.

Weaver can sling it, and he’s been much better of late. In his last 4 outings, only one of them led to big numbers for the opposing offense and that game was at Coors Field in Colorado, where offensive numbers are always out of whack.

Are Giants worth betting on against right-handed pitching?

Another thing to know is how the Giants struggle against right handed pitching. Traditionally, the G-men have had problems facing righties and today they face one. This year’s group has a hot hitting Longoria, the steady bat of Donovan Solano and the addition of Wilmer Flores, all from the right side, which has made facing lefties an easier task so far. The Giants team OPS against lefties is .805, only .711 against righties.

Weaver will have a few matchups he can exploit. New hot shot rookie catcher Joey Bart is now struggling after a loud entrance. Alex Dickerson is likely to be in the lineup and is below the Mendoza line at .195. Austin Slater is out injured which means the Giants need to put either Mauricio Dubon, Joey Rickard, or Steven Duggar in the 3rd outfield spot and all are light hitters, at least in the moment.

Now it may sound like I’m setting up to tell you to lay the numbers and go all in on the Dbacks, but I’m not. I’m just saying, exercise caution. The Giants look like a live dog, but there are some potential pitfalls. They’ve lost 3 straight and have scored just 4 runs during that stretch, so they’re cold. But here come the good numbers for the Giants, and the eventual reasons why I like them in this matchup.

Diamondbacks pitching is not helping their cause

Arizona’s pitching is terrible. Their team ERA is 5.25 and they’ve given up the most home runs in the majors by a large margin. In 32 games, they’ve allowed a whopping 59 long balls.

And the Giants have been using the long ball to their advantage the last few weeks. They’ve ripped 36 out of the park in their last 24 contests. Brandon Belt is their hottest hitter and from the left side, he has a tasty matchup against Weaver. Also, even though the Dbacks won game 1 of the series Friday night, the Giants bats woke up with a 3 run rally in the 9th, which may carry over to Saturday. They have a history of hitting the ball well in Arizona.

Trevor Cahill has shown he will at least keep the game close until it gets to the bullpens. The Giants have the better bullpen. San Francisco is desperate to get back on track after losing the last 3.

Exercise caution with the size of your wager, but the +120 money line bet on the Giants is my favorite play here. If you have some extra scratch laying around, I’d put that on the over 9.5 runs at -104.

Arizona is “Coors Field South” and the San Francisco offense has been doing its part until recently.