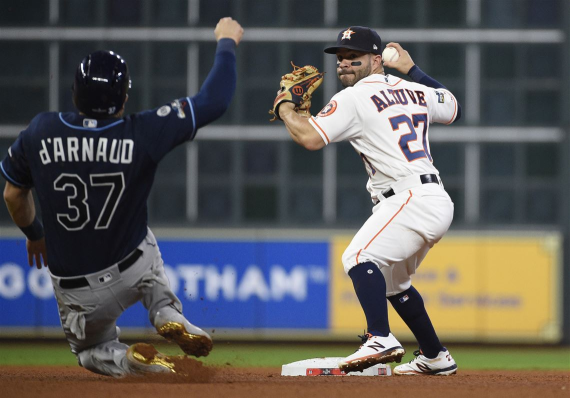 While the National League has seen some of its stronger regular-season teams exit early, the American League Championship Series features the two best teams in the league. The ALCS will kick off Saturday night when the New York Yankees travel to Minute Maid Park to take on the Houston Astros.

The Yankees had a relatively stress-free division series, as they swept the Minnesota Twins (although it has seen them have to sit for almost a week). The Tampa Bay Rays pushed the Astros to the brink, but Houston was ultimately able to prevail in Game 5 behind another dominant performance by Gerrit Cole.

The moneyline for this matchup features the New York Yankees at +145 and the Houston Astros at -155. The over/under in terms of runs scored is set at 9.

When you put it all together, it was the Astros who have the edge in terms of run differential. They ranked first overall with a run differential of +280 while the Yankees came in third at +204.

The New York Yankees absolutely obliterated the Minnesota Twins during their three-game sweep. The offense is clicking, and the Yankees are full of players that can hit it out of the park. In the ALDS, the Yankees had eight players who hit .250 or higher and had five hit home runs.

Leading the way was Gleyber Torres, who hit .417/.462/.917 with a home run, four runs batted in and five runs scored. Didi Gregorius also hit phenomenally with a .400/.500/.700 line, a home run, six runs batted in and two runs scored. Throw in players like Aaron Judge, DJ LeMahieu, Giancarlo Stanton and Gary Sanchez, and this is a team that is capable of putting up a crooked number.

In his one game of the ALDS, Tanaka went five innings, allowing three hits and one earned run and walked one while striking out seven during an 8-2 Yankees win. Beyond Tanaka, the Yankees boast a solid bullpen. As a result, they will likely feel very comfortable if Tanaka can give them just five or six innings.

Greinke Looks To Bounce Back In Game 1

The last time that Greinke pitched, it didn’t go so well. In a Game 3 loss to the Rays, Greinke went just 3 2/3 innings, allowing five hits, six earned runs and a walk while striking out five. This time pitching at home, Greinke will look to give his team an opportunity to get the win in Game 1 ahead of Justin Verlander and Gerrit Cole’s starts.

After the trade that brought him over from the Diamondbacks, Greinke went 8-1 with a 3.02 ERA, 1.07 WHIP and opponents hit .246 against him in 10 starts with the Astros. In that time, he went 62 2/3 innings, allowing 58 hits, 21 earned runs and six home runs and struck out 52 versus nine walks. He will look to show that form, as opposed to what he showed in the ALDS, against a vaunted Yankees lineup.

Offensively, the Astros are hoping that Game 5 will give them a bit of a spark. After struggling through the ALDS, the Astros’ offense finally found a groove in the series winner. They put up four runs in the first and finished with a pair of solo home runs from Michael Brantley and Jose Altuve in the eighth inning.

Speaking of Altuve, that home run made him the all-time leader in home runs in the postseason from a second baseman. In the regular season, Altuve hit .298/.353/.550 with 31 home runs, 74 runs batted in and 89 runs scored. Add players like Alex Bregman, George Springer, Brantley, Yordan Alvarez, Carlos Correa and others, and this is a lineup that can be just as intimidating as the Yankees.

Greinke will never be the dominant flamethrower that Verlander and Cole have been this season, but he is better than what he showed in the ALDS. Throw on top of that the fact that the Yankees don’t boast nearly as dominant of a pitching staff as that of the Rays, and I think the Astros will take Game 1 of this series. While Greinke likely won’t throw a shutout, I think he can minimize the damage and will give his offense an opportunity to build off of their Game 5 performance from the ALDS.

In a series where home-field advantage may play a big role throughout, I like the Astros to take Game 1 in this one. I wouldn’t blame you if you took the Yankees and the favorable moneyline, but for my money, I will take Houston at -155.