Alonso Remains on Tear; Is He A Shoo-in for NL Rookie of the Year? 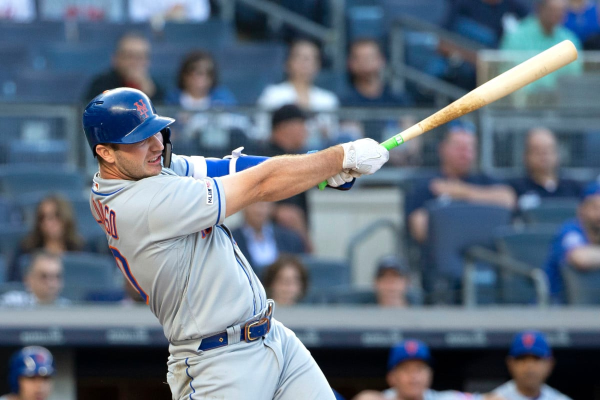 Pete Alonso is one of the hottest hitters in baseball — Is he a lock to win the NL Rookie title, or can someone else give him a run for his (and your) money?

Betting prop bets, particularly futures bets on individuals, is a lot of fun, and this year has been no different, particularly in the National League. Pete Alonso, even as far back as March, was considered the odds-on favorite at about +200 to win the National League Rookie of the Year title. The young rookie would be joining a Mets team with a lot of promise and expectations, not just in the NL East, but in the NL as a whole.

And he’s shown and proven it.

Alonso showed up to the Mets’ spring training without a guaranteed slot on the squad. But through his on-field results and consistency, he’s not only shown to be one of the better young players on the team, but he’s also shown the NL and MLB as a whole that he has the tools to be a two-way player. But it’s his slugging that has been outstanding.

As a rookie, the kid is averaging a .642% and is second in the NL home run leaderboard, ranking just behind Christian Yelich of the Milwaukee Brewers. There’s no doubt he has helped keep the Mets competitive in the NL East, and in the league as a whole, he’s been tremendously valuable, as demonstrated by his WAR of 3.7, which is top three in the NL behind Cody Bellinger and the aforementioned Yelich.

While his odds as the favorite to win the award are only going to be strengthened each and every Mets victory or each and every swing of his bat that goes yard, there is no doubt there are some phenomenal candidates behind him, particularly the likes of Fernando Tatis Jr. over in San Diego, which may give him a run for his money.

Purely from an odds and present performance standard alone, just looking at the Mets and Padres, you’ll see two teams trending in similar directions. After an outstanding series against the Colorado Rockies, the Padres have cooled off a little bit and returned to normalcy, or as normal as you’d expect from one of the league’s consistently underperforming teams the past few seasons.

That said, the Padres have been more mediocre than their usual abysmal selves, and before the Padres fans hurl rocks at me, hear me out. It’s not all bad, or rather, it’s not all mediocre.

Fernando Tatis Jr. has been anything but mediocre. In fact, he’s been incredible and is showing the makings of a superstar in the league. Tatis Jr. leads the team in batting average with a solid .323, leads the team in OBP, is second behind Hunter Renfroe in slugging, and leads the team in WAR with 2.3, edging out Renfroe and Manny Machado by a combined two-tenths of a point.

There is no doubt that his young hotshot has been showing out for this team, and he’s showed major guts in big-time spots, defensively and offensively. In particular, his recent performances against the Rockies. Tatis Jr. is, in endearing terms, an absolute freak on both sides of the ball. There is a very good case to be made for him being NL Rookie of the Year, but while his team is not playing as well as the Mets overall, he has certainly shown his individual value to the team and National League as a whole.

The Padres still have a ways to go before they can really be in contention, though, especially in a highly-competitive division.

Want to be contrarian? Go ahead and bet on Tatis Jr., but because of the Mets outperforming, and Alonso’s overall bigger platform in a major market playing well, expect him to take home the ROY title in the NL. Definitely value on Tatis Jr., but Alonso is likely still the guy to beat.