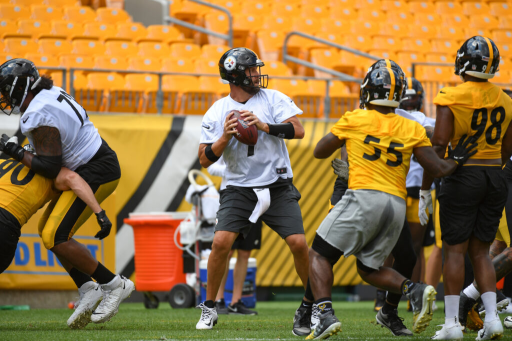 All three state legislatures of the Maryland, Louisiana and South Dakota will work to define the rules and regulations in the hopes that they sports betting can be up and running by next September, before the 2021 NFL season.

The next state that could possibly legalize sports gambling is Virginia.

The only undefeated team in the league, the Pittsburg Steelers, are finally gaining the respect from odds makers as they are the considered the 2nd most likely team to win the Lombardi Trophy (FanDuel +600).

I understand that the Steelers will have to go through the Ravens and Chiefs respectively on their quest for a Super Bowl title, but their value at (+600) is almost too hard to pass up at this point with how well they have played in the first half of the season.

However, I still love the Steelers chances at making at least the AFC title game, which could be against either Kansas City or the Baltimore Ravens, both of which have shown chinks in their armor at certain points thus far at the halfway point in the season.

Another team to take a look at is the New Orleans Saints at (+750). As of the past three weeks the Saints have proven to be one of the most complete teams in the NFC. If they continue winning at this rate and lock up the number one seed, then I expect the Saints, with homefield advantage, to have a shot at making it to the big dance.

With the Golden State Warriors returning Steph Curry and Klay Thompson to the hardwoods for the 2021 season, it is no surprise that Warriors have the fourth best odds to win the NBA Championship next year (+700). With trade pieces such as Andrew Wiggins and the number two overall pick in the upcoming NBA Draft, they have the flexibility to add even more talent to an already NBA Championship caliber roster.

I believe the Warriors are a safe bet if you want to invest on a team with a large payout for the upcoming NBA Season.

Another team to look at is the Boston Celtics at (+1200). The youthful core of Tatum and Brown will have another year of experience under their belts as they nearly defeated the Miami Heat in the Eastern Conference Championship series this past season.

I expect Celtics GM Danny Ainge to work his magic during the NBA draft which could involve a big trade to add even more depth to the Celtics young roster. I wouldn’t be surprised if Ainge tried to move Gordan Heyward elsewhere for a big that could bolster the Celtics chances at coming out of the Eastern Conference in the 2021 season.

The Celtics have tremendous value at (+1200) and are my pick to come out of the East.