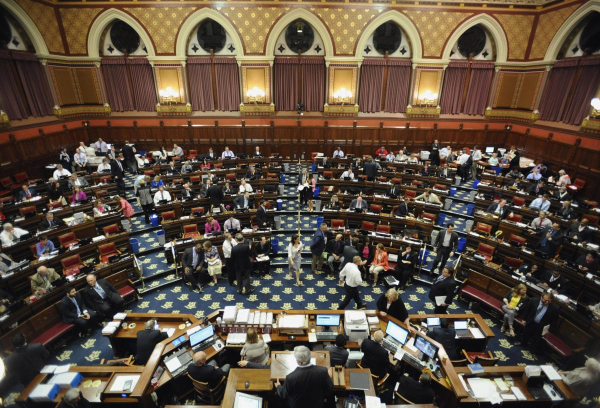 It’s a new year, and for those in states without legal sports betting, the questions have already begun about when bills may pass. This series will look at a where things stand in different states across the country.

Well, it’s finally 2020, and with that comes a new state legislative session for many states across the U.S. 2019 was a very busy year at the state level when it came to passing sports betting laws, and this year promises to be just as exciting. However, every state moves at its own pace, so we thought we would give you an update on where things stand in certain stats and what to expect when the governments sit in early January. This article will focus on 3 East Coast states to start: Connecticut, Massachusetts, and New York

A lot of work to do in Connecticut

In Connecticut, it was widely believed that the new governor, a proponent of gambling across the board, would find a way to quickly pass the sports betting bill that did not make it into a special session in 2018. However, it appeared early into his tenure that newly-elected Governor Ned Lamont was going to try to solve all the state’s unfinished gambling business in one comprehensive bill. This did not succeed, as there is a significant amount of debate over new land-based casinos being proposed in the state.

Despite the belief that a deal in principle was done between the tribes, the horse racing industry, and the last Governor to approve sports betting, by rolling it into a much larger discussion, it appears any goodwill is gone. The tribes believe they have the exclusive right to sports betting in Connecticut, while the owner of the tote license, Sportech, vows to fight tooth and nail for their inclusion. All of this seems messy, and if you watched any of the testimony during the hearings on the topic last year, you know it doesn’t appear to be any closer to a conclusion.

We’ll see what 2020 brings, but unless the government unbundles the issues, its hard to imagine sports betting laws will be passed before the late spring.

Just south of Connecticut, New York is gearing up for a long battle of its own, but for very different reasons. Land-based sports betting was passed into law all the way back in 2013 and when PASPA was repealed, the four land-based casinos in the state were given licenses for sportsbooks. Very quickly, deals were struck with vendors, and in 2019, sports betting became a reality.

However, there are several outstanding issues with the regulations as they stand. First, some tribal casinos in the state were not given licensing as part of the 2013 law, so they took it upon themselves to cut their own deals. The Seneca tribe partnered with a sportsbook operator in an effort to launch sports betting at its three Western New York properties, with close proximity to the Canadian border. Other casinos and racetracks in the southern part of the state are also lobbying for licenses of their own.

The biggest issue in New York when it comes to sports betting remains the lack of mobile and online options for bettors in the state. With the four legal sportsbooks and the Seneca properties nowhere near Manhattan, there is a definite need for a solution for the millions of people that find themselves far away from a property. Those who live close enough can take advantage of mobile betting offered just across the river in New Jersey, but even that is a bit cumbersome. The fact is that the 2013 bill was shortsighted in nature, and if the numbers in New Jersey are any indication (85% of the handle coming from online and mobile), the state government would be foolish not to amend the current language to allow mobile betting. Otherwise, the figures will continue to be disappointing, and the tax coffers in New Jersey and other nearby states will continue to grow from money coming from New Yorkers.

How long before Massholes can put their money where their mouth is?

Considering how badly the seasons ended for the Red Sox and the Patriots, it is entirely possible that many sports bettors in Massachusetts were saved by the lack of legal sportsbooks in the state in 2019. However, given the love of sports in the area, and the fact that new casinos have popped up both in Boston and on the border of Connecticut, one can only wonder why it is taking so long to pass a sports betting bill.

Considering Boston is the home of Draft Kings, one of the most influential players in the sports betting world, it is surprising that a bill introduced in early 2019 seemed to go nowhere. The momentum does not seem to be building at any breakneck speed either, given the feedback from some of the people involved in the committees that would pass such a bill. To his credit, Governor Charlie Baker does seem to want to be able to have sports betting up and running by the summer, perhaps to take advantage of the state’s love of their beloved baseball team and maybe one more run from their NFL dynasty. Regardless, pressure will be mounting on the state to take action as New Hampshire just launched mobile sports betting in December 2019, and if states like Connecticut pass legislation early in 2020, there will be options available to Massachusetts gamblers.

This is the first part in a series about what’s to come in regulated sports betting in 2020. Our next piece will include information on three more states that may be in the market to pass sports betting legislation very soon.