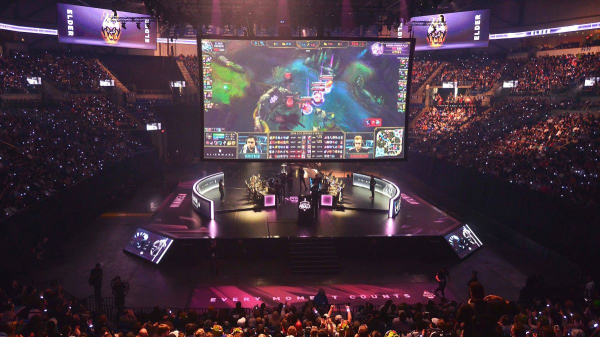 With the lack of live sports in the wake of the COVID-19 pandemic, we have seen plenty of odd things getting people to the TV screen. Luckily, our favorite sports like basketball and hockey are on the road to a return, but you have to wonder if people will continue going back to the virtual screen when things return to normal.

That’s right, in place of our traditional sports, we’re now seeing video games be the substitute for our betting appetite.

Marco Blume, trading director for Pinnacle, remembers a time not too long ago that video games were basically an afterthought.

“When we started with e-sports in 2010, we got maybe $100 in wagers in a week and got excited,” said Blume. “We would watch the screen and cheer as each individual bet came in. When I first pitched e-sports wagering to my board, they either said, ‘What are you talking about?’ or they laughed.”

Over in Europe, half of all sports betting since March has been on e-sports. Some bookmakers have seen increases in e-sports betting of more than 40 times over that span.

“E-sports is king now,” Blume said. “Since March, e-sports has been our No. 1 category globally, and the overall majority of total wagering for us. Every significant bookmaker now offers e-sports. If you didn’t before, you certainly do now.”

Surprisingly, worldwide e-sports gambling revenue is expected to double this year up to $14 billion. As sports gambling continues to grow in the U.S., states like Colorado, Nevada, and New Jersey have all decided to go ahead and allow wagering on e-sports – something that wasn’t allowed until recently.

For instance, Nevada has been allowing sports bets since 1949. The state approved a single e-sports tournament to accept wagers in 2016 and another two in 2017. Since March, Nevada officials have approved 13 different e-sports leagues and tournaments to be bet on.

“People out there want to bet on something, and our licensees want to offer betting opportunities for their customers, and by the nature of how e-sports work, the players can sit in their house and still compete,” said James Taylor, chief of the enforcement division of the Nevada Gaming Control Board.

In the middle of March, Taylor claims that casino operators were filling out one e-sports wagering application per day. His team approved all but two applications; those two weren’t satisfactory for investigators with proper corruption protocols in place.

Many of these applications have come from the Nevada subsidiary of William Hill, which has over 100 sportsbooks within the state’s borders.

Seth Schorr, chief executive of Fifth Street Gaming and founder of the Nevada Esports Alliance, said, “I expect that within the next five to 10 years in North America, e-sports will be third after the NFL and NBA in terms of total wagering.”

That is quite a staggering statement, considering there are collegiate sports like basketball and football that are major moneymakers. Perhaps e-sports can make a small dent in the North American sports betting industry, but you have to believe that people will be jonesing for their traditional sports to bet on once things return to normal.

Most of us grew up playing video games, and it’s somewhat head-scratching to see this newer generation of people gather in masses to watch other people play. Nevertheless, it’s bringing in money from nearly every avenue nowadays – and that’s all that matters to some.