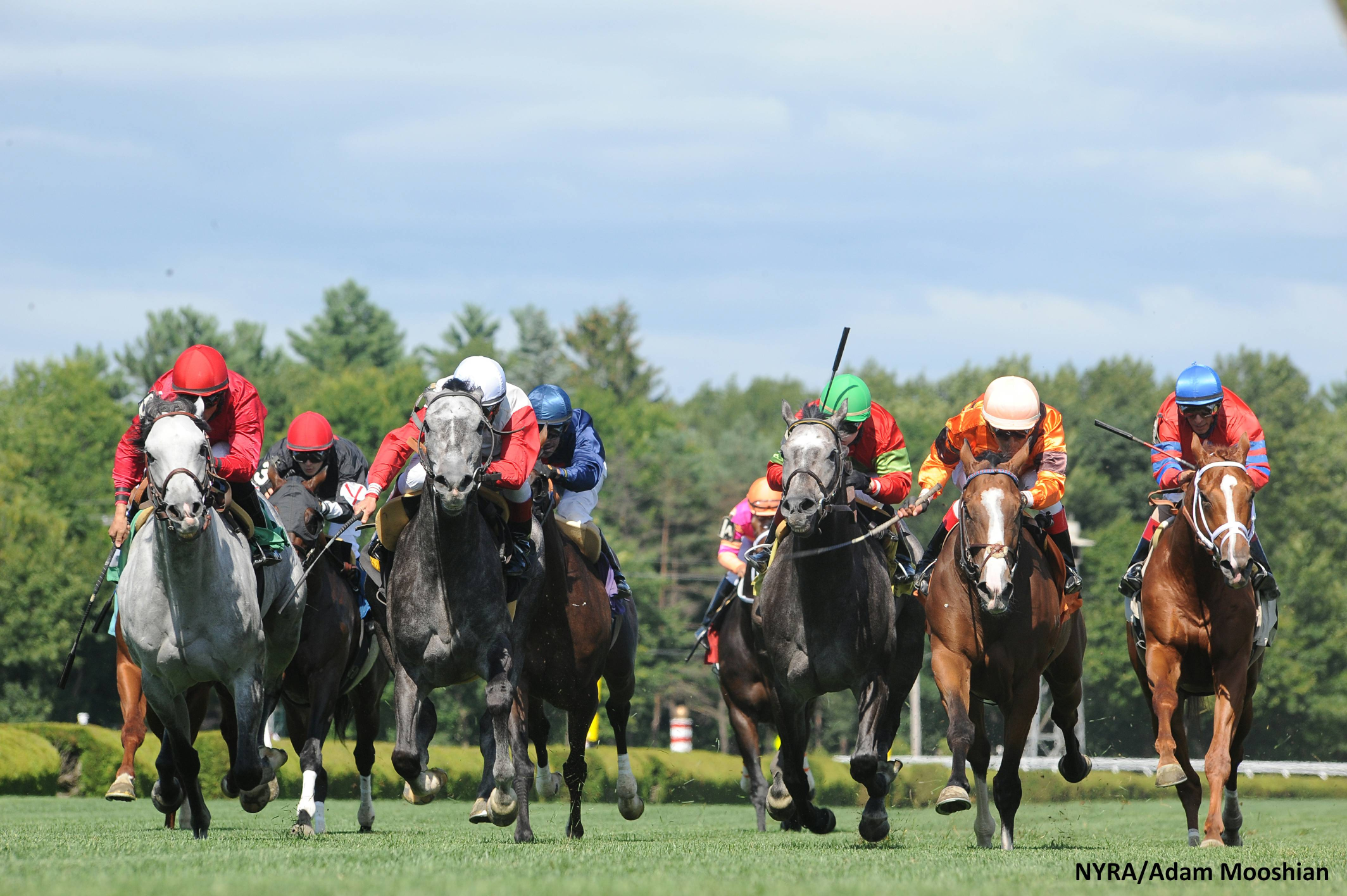 This is another state-bred stakes race at Saratoga with a competitive field, but pace handicapping gives some clues on what horses have the best chance.

Some favorites will probably go head so head early and lose steam in the end. This will open the door for win and places by come from behind horses, possibly at good odds. One of the short morning line odds horses is probably going to benefit but so can longer shots.

Surprises are possible at Saratoga and I expect a lucrative exacta and trifecta.

Analysis and picks for the 8th race at Saratoga on August 9 2018:

Number 1, BYSELF’s winning streak was stopped last month when she tried to run on a longer distance than she was used too and on a sloppy track too. Today will be dry in Saratoga but she is again trying something new: going for a mile on the turf. She picks a good post position for this first try and a super-hot jockey is on board, so we can bet that BYSELF can capitalize on the luck of the draw. The pedigree does not scream turf though and the only workout on the surface is subpar… She is likely going to try to go for the lead but there is competition for it in this race, so I suspect that it won’t be easy… I think that BYSELF will face a poor pace scenario for her style and will be doing so on a long distance, on a new surface to boot. As one of the likely favorites, I think that BYSELF is a bet against today.

Number 2 GOODBYE BROCKLEY came very close to winning a similar race a bit over 1 month ago, after a relatively easy race despite starting from a poor post position. Today, the post position is ideal but GOODBYE BROCKLEY will need to find racing room in the stretch. She has never run at this distance but won at longer and shorter, so we can assume that the distance today will fit well. GOODBYE BROCKLEY ran a couple of poor workouts since the last race which is a bit of a concern considering the long layoff. Before previous good races, she always had at least a decent workout so that’s a big question mark for me. GOODBY BROCKLEY is a threat today but with a question on the form, I think that there is value is betting against her today.

Number 3, KREESIE managed to win at this class level against a few of today’s foes in June, after an outside trip throughout. That was a good win but KREESIE did not repeat in her last race against a slow pace which made her day difficult. She works for a hot trainer so maybe she is ready to rebound in Saratoga? The pace should be hot today, opening the door for late runners like her. There is a question mark on the race distance but KREESIE starts from a pretty good post position, so she should be able to save some ground at least. She has her place on the podium.

Number 4, MISS JEN takes a big step up in class, going straight from a series of claiming races to take part in this Stakes race. The distance should be no problem but MISS JEN was not doing great on the tight turns of the Belmont Park inner turf course, so it is not sure how she will like the Saratoga inner turf. With the course suitability and class in question, it is probably better to pass on MISS JEN but at long enough odds, maybe a place on the bottom of exotic bets can pay off.

Number 5 CRASHING CONNIE will make her first try on the turf, but she has some winning experience at the stakes level on a lesser track. She has early speed and will probably try to go for the lead but will face opposition for it. Her pedigree does not indicate a big propensity for turf and with a difficult post position and a strong pace expected, there is no compelling reason to bet on CRASHING CONNIE to do well on the first try on turf.

Number 6, WEGETSDAMUNNYS closed quite well in her only try on turf and faced some traffic trouble. The overall race was a pretty easy trip but with a more open stretch run, WEGETSDAMUNNY would have done a bit better probably. Following that race, she went back to dirt and got beat by Crashing Connie. The only turf try was her best race, so it is good to see her back on the surface and her closing speed should come in handy today. A place on the podium is not out of the question but I would need long odds to bet on the win.

Number 7, CODRINGTON was scratched from a race earlier this week where she was going to face males and hopefully this time she actually starts. CODRINGTON has had some of her best races at Saratoga including her maiden win last year on this track. Since, her career has not been so bright unfortunately. She has been racing in lower class and not doing so well… She changed racing teams in June (claimed for $50,000) and raced poorly in her first race for her new owners. She had a terrible post position and the grounds were soft so maybe she had some excuses? Today she unfortunately starts from a middle post position and on the Saratoga Inner Turf course, it would have been better to be on the inside. The good news is that she has enough early speed to hopefully get placed forwardly. Looking at the trainer’s stats, he does very well in the second race with a horse so maybe she is ready to impress…CODRINGTON is likely to go off at high odds though and this could be the time when she gets back on track and scores a place.

Number 8, BARREL OF DESTINY is still a maiden after failing 6 times at various distances. The connections appear confident in her, but the performances really don’t indicate that BARREL OF DESTINY has what it takes to do well in a stakes race… Hard Pass.

Number 9, MENTALITY finished third behind Kreesie and Goodbye Brockley after pressing the hot pace throughout. Keeping third was therefore a form of performance. The next try was another failure but another good speed figure. Today, MENTALITY starts from a poor post position and will likely try to stay close to the lead again which should mean being parked out throughout on the tight Saratoga turns… The distance might be a bit long too so I think there is enough reasons to bet against MENTALITY, especially at the likely low odds.

Number 10, STARLITE MISSION finally broke her maiden last month, at this distance on the dirt and her jockey comes back on again to try to repeat on the turf. The winning style last out was going wire to wire which would be tremendously difficult to do today, starting from post position 10. I doubt that the jockey will be reckless enough to try it but even if he does not, the horse’s late speed is probably not the best in this field so STARLITE MISSION is probably not going to do great today.

Number 11, AUNT BABE is entered only for the main track and with the weather expected dry today, the turf race should take place. We can therefore disregard AUNT BABE, she should not run today.

Number 12, MY ROXY GIRL is another one entered for the main track so we can disregard her, she is going to be scratched most likely

The come from behind horses will have the best chances in this hot pace expected and of them. KREESIE should be the one with the best chance to capitalize on that pace, considering her class and pot position.

Behind her, I think that CODRINGTON will do well if she can start well enough and find a spot near the inside, right behind the pacing leaders.

WEGETSDAMUNNYS comes back to turf and can hopefully progress on this surface to grab a podium spot at decent odds.

MISS JEN jumps multiple class levels but she has a pretty good post position and late speed. She can claim a minor purse at long odds.