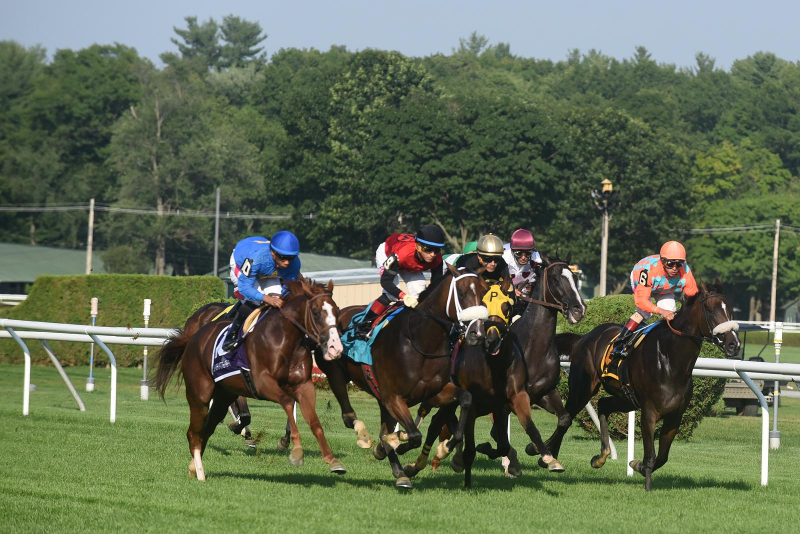 This is not the most high-class race but, on a Monday, it is not too bad to have even a state-bred stakes race going on.

That’s the beauty of the Saratoga racing season, a stakes race to bet on every single day.

This mile race on the Saratoga inner turf track should favor horses starting on the inside and the favorite is very well placed in that regard.

He will be hard to beat but the places are more open than the morning-line odds say and I think that the only female in the race can surprise at high odds.

Analysis and picks for the 2nd race at Saratoga on August 6 2018:

Number 1, CODRINGTON has done some of her finest racing at Saratoga, and actually broke her maiden last year on this very track. Since then, it has not been the brightest career however, and she has been racing in lower class and not doing so well. She was claimed for $50,000 in June and raced poorly 2 weeks ago for her new connections. She had a terrible post position and the grounds were soft so maybe she had some excuses? Today she is in the best spot at the rail and she has enough early speed to take advantage. Looking at the trainer’s stats, he does very well in the second race with a horse, especially when he runs relatively soon. Still, CODRINGTON will be facing males for the first time and in a much higher class for her so caution is warranted. But CODRINGTON is likely to go off at high odds so maybe having her on exotic bets can pay off.

Number 2 THERAPIST is going to be an odds-on favorite and with pretty good reason as he is the only horse in the field proven at this class level. Actually, he is more than proven, having won in open stakes races at this distance. THERAPIST won a New York State-bred race in his last outing a month and a half ago and it would not be the first time he repeats in that setting. One could wish for better workouts leading to today though. THERAPIST likes to come from behind and a hot pace would serve him well, unfortunately I don’t think that he is going to get it today. Based on class and against this group, he looks hard to beat but I don’t think there is much value in betting on him for the win. He needs to be in the Exacta though.

Number 3, STONEY BENNETT is entered only for the main track but looking at the weather forecast, the turf race is unlikely to be cancelled. As such, STONEY BENNETT can be disregarded in the handicapping.

Number 4, TEN EYCK just won his first race at Belmont Park last month in easy fashion but he did it in a Maiden claiming race, which is the lowest class possible for it. This is going to be a much harder race to win and furthermore, the pace scenario is not going to help him. I don’t think that TEN EYCK has much of a chance today unless the racetrack is very deep and then again, it is not sure he can prevail in that case.

Number 5 FORWARD MOTION makes a return to turf after a few failures in claiming company on the synthetic track. FORWARD MOTION tends to run forward and given that he is more experienced in sprints than routes, we can expect him to go to the front early. Based on class and performance so far in his career, it is hard to see him go all the way today…

Number 6, SANTO ANTONIO is still win-less and it is a strange idea to enter him in a stakes race to try and break his maiden. The trainer attempted the same in June and SANTO ANTONIO finished 8 lengths behind the winner. The workouts since do not reveal a likely improvement. SANTO ANTONIO has some early speed so maybe he will be a factor in setting the pace, but I doubt he can go very far against horses who beat him soundly the last time.

Number 7, COLLECTIVE EFFORT needed 11 tries to break his maiden and did it going wire to wire on the inner turf track at Belmont Park. He was starting from the rail that time and today is almost all the way on the other side of the gate so that will not be as easy. He finished second to Therapist whom he faces again today, and he gets a poor starting gate to turn the table on him. His trainer is doing very well at Saratoga recently, but it is a pretty tall order today all things considered, and the odds are likely to be too low to take a gamble on COLLECTIVE EFFORT today.

Number 8, BEACH ACCESS finished well behind Therapist and Collective Effort in his last race and apparently was tiring on a shorter distance than today. It is not too surprising given that BEACH ACCESS had a lot of trouble breaking his maiden even at the lowest class levels… It will be only his third start on the turf so maybe there is some future for him but starting from the outside post position on the Saratoga inner turf track, this race is going to be very hard to win or even place in.

The odds-on favorite, THERAPIST, is really a head above the rest class-wise and starts today from a favorable post position to boot. The pace scenario is probably not going to be the most ideal for his running style but despite that he should have no trouble disposing of this field unless he is having a very bad day. I think that the odds will be quite low to bet on the win though, but he needs to be the key in the exotic bets.

To add some value to the Exacta, I think that CODRINGTON is the right choice. Being a female and making a big step up class-wise, she is likely to be disregarded by the betting public. I think that her trainer might have done a good job with her though and she should be well-placed throughout to earn a spot on the podium or maybe even win it with a lot of luck.