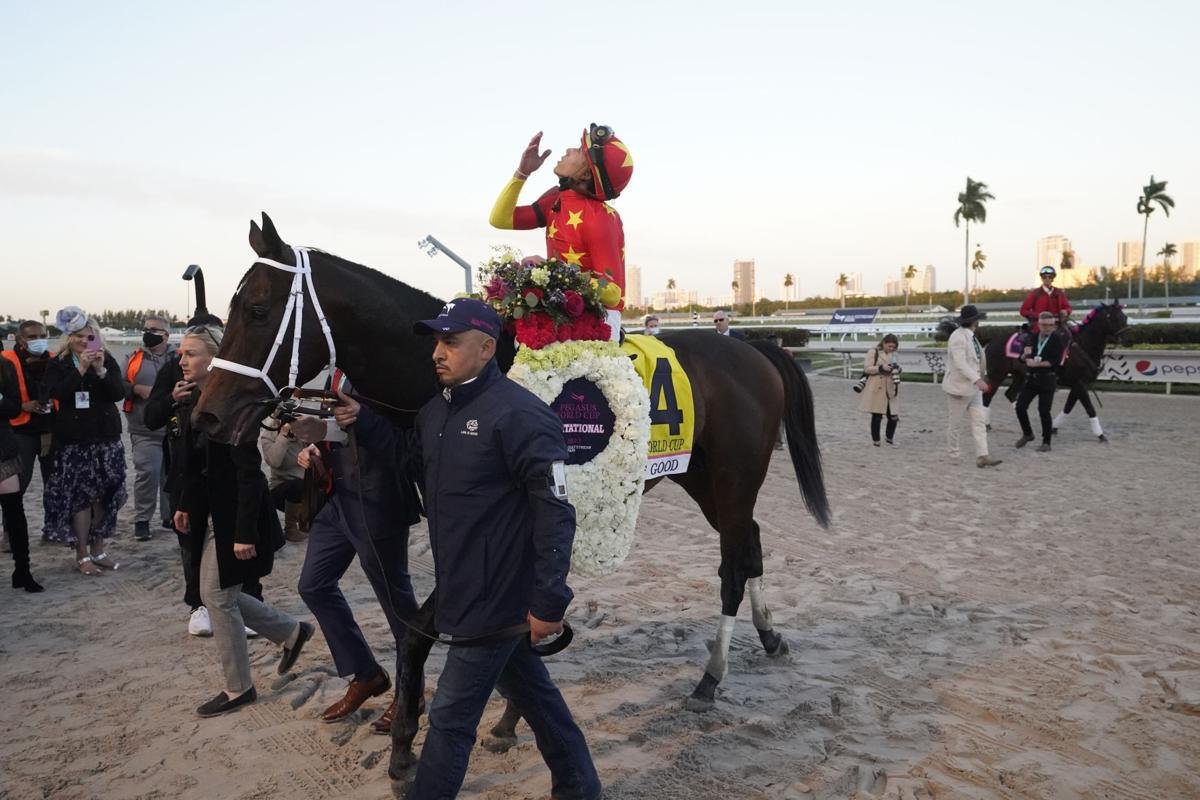 There were several major story lines heading into the past weekend of races. The headline after the weekend was Life is Good dominance in the Pegasus World Cup.

The richest day in Florida racing featured 7 stakes races. Three of the stakes were a part of the world renowned Pegasus World Cup festival.

The Pegasus World Cup was billed as a two horse race. Newly turned 4 year old Life is Good was set to square off against defending champion Knicks Go. The race would mark the final performance in the career of Knicks Go as it had been made clear that he would be retired following the race.

Many, myself included, saw this as a race in which the two favorites would duke it out head in head on the lead throughout much of the race. In reality the race played out completely differently. Following a good break for all, Life is Good proved too fast for others in this race and got out to an easy lead. The colt breezed around the track and wired the field under light urging through the stretch.

Knicks Go chased gamely throughout, but was no match for the Pletcher trainee who was transferred out of the Bob Baffert following the 2021 Kentucky Derby fallout. While it may not have been the Hollywood slugfest that many were hoping for, it was undeniably one of the most impressive performances in recent memory.

In the race before the World Cup Invitational, another defending champion took to the starting gate. This time it was Colonel Liam in the Pegasus World Cup Turf. Unlike Knicks Go, this gray was able to successfully defend his title.

Colonel Liam broke well enough and found his spot in the 4th position. Never Surprised made an impressive break from the 12 hole and was able to find the rail into the first turn. Throughout the race Never Surprised set slow fractions which is often a recipe for stealing turf racings on the front end.

Entering the far turn, Colonel Liam’s jockey had one goal-keep the horse clear. Off the rail Irad Ortiz asked the favorite to loom up and by the time the horses entered the stretch, it was pretty clear that Colonel Liam was clear. He continue to lift winning the race by a length and a half.

Heavy race favorite Regal Glory was checked considerably before hitting the first turn. The horse was relegated to the back of the pack where she would sit throughout much of the race.

As the horses headed into the final turn, Regal Glory had found her way to the middle of the pack. Jose Ortiz, riding for Chad Brown in famed two toned green silks of Peter Brandt, angled his horse into the clear and asked her for run. The field had no chance. Regal Glory blitzed the field, picking off runners one by one as she navigated the widest trip of anyone. In the stretch she not only made the lead, but continued extending it through the wire.

Cezanne went off favored for the Baffert barn. However, in the end it was the other Baffert, Essential Wager who got the job done. Essential Wager broke best of all and rushed up for the lead. Throughout much of the race he battled with Team Merchants to his outside before putting him away mid-stretch.

Things got dicey near the wire as long shot Shooter’s Shoot closed significant ground late, but ran out of time. The favored Baffert was able to dink up for a third place finish in the short field.

Despite having multiple entries in yet another short field stakes race, Bob Baffert was unable to score a victory. Forbidden Kingdom broke sharp from the inside post and got out to an early lead. Unlike the winner of the Palos Verdes the Richard Mandella trainee faced little pressure at any point in the race and won fairly comfortably in front running fashion.

Baffert filled out the trifecta with both the 2nd and 3rd place finishers in the race.

Canoodling left the gates at 22-1. When you go off at that price, a victory often requires an ideal set of circumstances. Roimes Chirinos created that just that with a perfect ride in the Megahertz.

As the latch popped on the gates, Roimes pushed Canoodling out quickly and got her on the lead. The jockey continued to let the horse extend opening up by a huge margin at the halfway point of the backstretch. Then it was time to back things down a bit and let the field use their energy to close the gap. As the field turned for home the pace quickened, but thanks to a breather before the far turn, this one had just enough left in the take to hold off pursuers.

The San Marcos was the marquee stakes race on Sunday. In the moments before the race favoritism bounced between Say the Word and Friar’s Road. Early in the race Acclimate and Bob And Jackie set an honest pace with Acclimate leading narrowly throughout much of the race.

The public’s choices were content to sit back and watch the duel unfold. Late in the lane Bob And Jackie kept on while Acclimate dropped anchor. Say the Word and Friar’s Road both began their runs, but Friar Road’s late kick was far superior to that of Say the Word who would flatten before he could get passed Bob and Jack.

In the end it was an easy win for Friar’s Road with Bob And Jackie holding for second. Say The Word would have to settle for third.

No matter how much the Kentucky Horse Racing Commission and Churchill Downs want to distance themselves from Bob Baffert, he just won’t go away. Following the positive drug test of Medina Spirit following the 2021 Kentucky Derby, an issue which looks like it may finally be resolved in February of 2022, Churchill Downs made attempts to block the trainer from running at their track.

With every move made by Churchill Downs, Baffert countered with lawsuits to lift the measures. The most recent development in the story was that Churchill Downs banned Baffert from earning Kentucky Derby or Oaks points. This effectively bans the trainer from having any starters in the big races this year.

However, because horse racing isn’t under a single jurisdiction there is no way to enforce this ban for the Derby prep races. Meaning that Baffert can essentially block other horses from earning points. Cue the Southwest from Oaklawn this Saturday.

The Bob Baffert trained Newgrange sat a few lengths back of the pace setters and came flying home late under the handling of Hall-of-Fame jockey John Velazquez. The win by the heavy favorite means that the 10 Derby points are not earned in the race. Barber Road, Ben Diesel, and Kavod won 4, 2, and 1 Kentucky Derby point respectively.

If the connections of Newgrange want to see this clearly talented colt in the gate on the first Saturday in May, they will need to soon begin the process of transferring training duties to another barn.

Secret Oath announced her talent on the Kentucky Oaks trail winning easily in the prep race. She sat well off the rail and a fairly easy pace set by Optionality. While most of the other positions in the race remained unchanged from the far turn to the wire, the same cannot be said of Secret Oath who appeared to be running in fast forward compared to many of her rivals. With the victory she is likely to train on to more prep races in search of a place in the Kentucky Oaks starting gate.