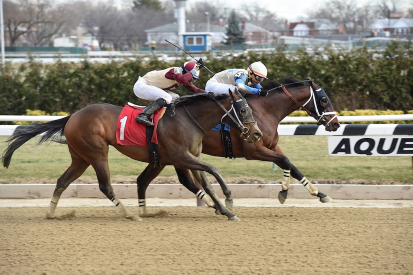 Horse Racing coverage on TV has recently become better with the new “FOX Sports Saturday At The Races” program on FS2. It is still cable TV, but we are making progress at least.

Today, they picked a couple of graded races including a nice little contest at Aqueduct in New York, the Franklin Square Stakes.

This race is a sprint for three-years old New York bred fillies and even though it is a short field, it is a pretty competitive race.

Multiple horses have shown early speed and the betting public will be split between multiple choices, all with valid credentials.

My favorite seems to be a head in front of the competition here, granted her recent vacations were not health related…

Analysis and picks for the 8th race at Aqueduct on February 23 2019:

Number 1, WADADLI PRINCESS broke her Maiden earlier this month, coming back from what is rated as a bobbled start. Having watched the race, I am not sure why it was rated so. It looked fine to me… WADADLI PRINCESS closed very strong but the pace that had been set up in front of her was suicidal, so the credit is limited. She switches jockey for this one and will an in-form jockey will ride her today. If there is again a very hot pace, maybe she can repeat but this is a stronger field and I don’t think that WADADLI PRINCESS will be so lucky today.

Number 2 MAIDEN BEAUTY broke her Maiden last year in a stakes race, but she has not been performing very strongly since. Though she shows a strong workout prior to this race, one should note that her style of racing, coming off the pace, is not very well suited for the Aqueduct racetrack. MAIDEN BEAUTY might grab a place on the podium, but I don’t see her winning the race today.

Number 3, STONESINTHEROAD is unbeaten in her career and unbeaten, evidently, at Aqueduct. She has raced only twice however and both times in lesser company. STONESINTHEROAD has some early speed but probably not enough to contest the lead to the first turn and after that I suspect that the race will be done. STONESINTHEROAD is labelled as one of the favourites by the Aqueduct racetrack handicapper but I find that generous despite her very solid Beyer speed figures. It looks like she does not have the early speed to get the lead in the first turn and I therefore believe that she will get beaten today. With some luck, I am right, and others will bet heavily on STONESINTHEROAD, raising the payout on my pick in the process.

Number 4, FORGOTTEN HERO is a bit of a gamble considering her layoff of two months but what are we if not gamblers? She is unbeaten in career and won her only two starts right her on the Aqueduct dirt and at this distance. The reason for her absence of a bit over two months is unclear, but she did race well before on a bit of vacation so maybe the trainer just had this race in mind for her. FORGOTTEN HERO has some good workouts leading to this race and if she can repeat the early speed and performance of her last race, she can beat everyone today. Her last race was great, and I am betting that FORGOTTEN HERO can do it again.

Number 5 QUIETUDE has a good record on the Aqueduct racetrack but there is little else to like in her profile. She seems pretty much outmatched but if the pace is truly hot in the early stages of the race, maybe she could grab a spot on the podium.

Number 6, FLUSH will catch the eyes of many with her flashy speed figure last month on this very track. She won this Maiden race easily, going wire to wire in a soft pace. She will not have such an easy race this time… Her hot jockey and in-form trainer may have a plan but looking at the pace scenario and the recent workouts, I believe that FLUSH will not do much today.

Three horses with early speed have valid aspirations on paper but based on pace handicapping, I believe that FORGOTTEN HERO can dominate the early fractions and coast to a win at the wire.

Hopefully FORGOTTEN HERO does not have physical ailments that have prompted her prolonged break but looking at the workouts, she looks very fine…