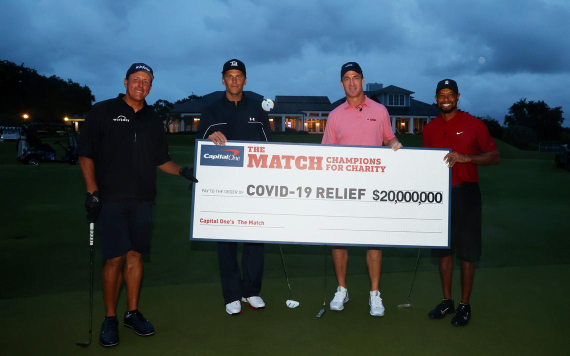 As the sports world does everything it can to get back to normal, it was an interesting doubles golf match on the Sunday of Memorial Day Weekend that grabbed our attention. In a close battle, it was the team of Tiger Woods and Peyton Manning defeating Phil Mickelson and Tom Brady by one up at Medalist Golf Club in South Florida.

The event almost didn’t even take place, as rains filled the sky and threatened to put a damper on the afternoon. Instead, a fun day was had by all, and a lot of money was raised in the process for COVID-19 relief efforts.

Celebrities would call in and offer challenge donations where a particular player would have to beat the other on that hole. At the end of the day, $10 million was pledged collectively by the four players, while WarnerMedia raised another $10 million throughout the day via online and text donations.

“Phil said he was nervous, so imagine us,” said Manning, the retired two-time Super Bowl-winning quarterback who is a member at Augusta National. “To go behind the ropes and get in these guys’ world and in the arena with them was really an incredible experience.

“I was not comfortable the whole time, but raising $20 million as people are going through such tough times, it’s something I’ll always remember and cherish.”

Manning was downplaying his efforts just a bit. On the fourth hole, the former MVP had a professional-like birdie to help his side a bit more.

The sport of golf has been at the forefront of trying to get events and matches back on schedule, mostly because there is plenty of social distancing measures that can be practiced. Just last week, four PGA professionals – Dustin Johnson and Rory McIlroy vs. Rickie Fowler and Matthew Wolff – got together and played a similar type of doubles match.

This was the first Tiger-Phil match of any kind since 2018. Mickelson won the last head-to-head meeting, netting a $9 million payday for winning on the Thanksgiving weekend match in Las Vegas.

The doubles match we saw on Sunday was scheduled to go down well before the coronavirus pandemic. However, it didn’t become a fundraising concept until just recently, also serving as a double-positive to have sports fans with some type of competition during the holiday weekend.

A lot was made about Brady’s performance, his first of any kind athletic competition since signing a two-year, $60 million deal with the Tampa Bay Buccaneers in mid-March. For most of the day, the six-time Super Bowl winner had struggled in all areas around the course. However, he did have the shot of the day.

On the seventh hole, Brady sunk a birdie wedge shot from over 100 yards out, even while having his pants split and a broken microphone on him. For that miraculous shot, pro golfer Brooks Koepka donated $100,000. Koepka saw Brady struggling and said he would give that money if Brady made a par on the front nine.

Tiger had an impressive day on his home course, not missing a single fairway all day. This was an opportunity for the viewing public to get another glimpse of the guy we have all immortalized over the last few decades.

“I feel a lot better than I did then,” said Woods. “I’ve been able to turn a negative into a positive and been able to train a lot and get my body to where I think it should be.”

Golf has certainly taken advantage of its unique style of play and gotten into the public’s hearts over these last two weeks. It will be interesting to see if the fans keep coming back, especially when the four major sports get back up and running.