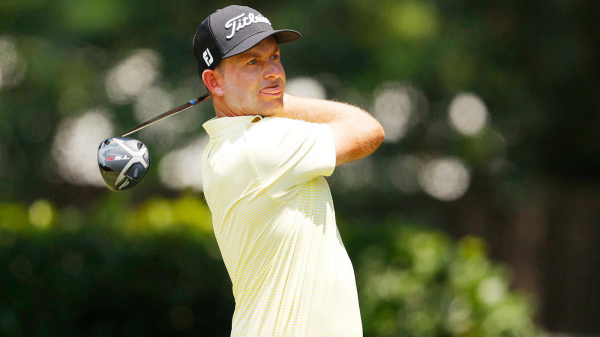 It was another wild weekend without spectators on the PGA Tour, which included a delay in the final round and a late finish with numerous golfers near the top. When it was all said and done in Hilton Head, SC, Webb Simpson came away with his seventh career win on tour. He was listed at +2800 before the RBC Heritage started.

Dressed in his late father’s favorite color, a yellow shirt, Simpson separated himself from a crowded pack with five birdies over a six-hole stretch on the back nine – the side that was much more challenging to the golfers over the last four days.

Simpson’s 7-under 64 was good enough to best Abraham Ancer by one stroke and set a tournament scoring record. In those four days, Simpson posted scores of 65-65-68-64. Luckily, those scores were slightly better than the rest, because there was plenty of guys nipping at his heels.

“I think it’s a good thing that guys were making birdies because they kind of forced me to be a little more aggressive and know that pars weren’t going to cut it,” said Simpson, who finished at 22-under 264 to break by two shots the tournament record Brian Gay set in 2009.

As for the big storm delay, it lasted three hours and truly threatened the tournament from being finished on Sunday. At that point, nine players were vying for the title, and Simpson was still behind by two shots.

Typically, Father’s Day marks the final round of the U.S. Open – the toughest on tour – and has since 1976. However, it was moved to September this year because of the coronavirus pandemic that put golf on hold for three months. Instead, we got a high-scoring free-for-all that was quite entertaining for all of the viewers at home.

“I won The Players on Mother’s Day after my dad passed away, and that was really special. That was an emotional win,” Simpson said. “U.S. Open on Father’s Day, I’ll never forget calling my dad after on the way to the press conference, and when he picked up the phone, he just was laughing. That’s kind of what he did when he was happy, he would just laugh. So I’m going to miss that laugh today for sure.

In the end, it was Simpson, Ancer, Joaquin Niemann, and Tyrrell Hatton all tied at 20-under late in the final round. You really have to give it up to all of those players, considering any of them could have potentially won the tournament. Ancer came awfully close to tying Simpson on the 18th hole, coming just short on a long 40-foot putt.

“That’s just golf. You’ve just got to keep trying,” Ancer said. “I’m not going to change anything or work on anything. I’m just going to keep doing what I’m doing, and I think that will eventually happen.”

Also in contention were Brooks Koepka and Daniel Berger, who just won at Colonial. Koepka came roaring back over the last two days, while Berger had some timely moments to keep him in the heat of things.

Next up for the PGA Tour is a trip to Connecticut for the Travelers Championship. It is still undetermined who will play because of the coronavirus testing that will be done prior to the tournament teeing off.

After extending their hot and San Diego’s cold streak, the Seattle Mariners will be looking to leave Petco Park with a two-game sweep as they take on the Padres this afternoon. Yesterday, the Mariners pounded out a dozen hits and plated eight runs, and Chris Flexen pitched 6.2 shutout innings to collect his third straight END_OF_DOCUMENT_TOKEN_TO_BE_REPLACED