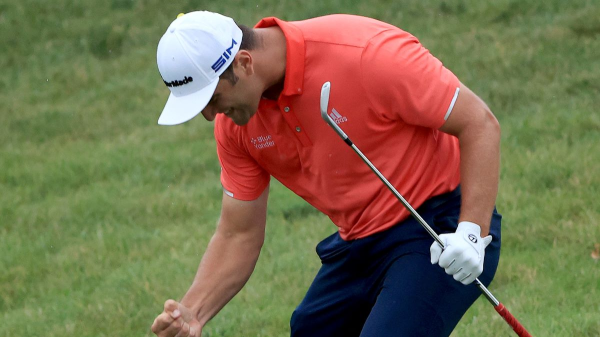 It was already an unusual set of circumstances playing golf at Muirfield Village for the second straight week. Then again, it was only fitting that a 3-over-par 75 was good enough to win the Memorial Tournament. There was even a little bit of drama along the way.

Jon Rahm had a strong eight-shot lead that actually dwindled to three with three holes left to go. In the end, though, he would have enough to get it done.

The final-round 75 was the highest final round by a Memorial winner since Roger Maltbie shot a 76 in the inaugural event that took place in 1976.

On the par-3 16th hole, Rahm got himself in trouble behind the green. He rebounded with a remarkable flop shot from the thick rough that landed in the cup for birdie.

What followed next was absolute chaos. A replay of Rahm’s shot showed that the ball moved slightly before hitting it, which gave him an automatic two-stroke penalty. Of course, he was surprised to learn of the infraction, but he had no choice but to power on.

The day as a whole proved to be a challenging one. It looked as if the frustrations of playing on the same course for two straight events finally got the best of some players.

Muirfield Village underwent some simple, but difficult, changes to make the course look a bit different. The roughs were left unmanned, making it more difficult to strike the ball, and the greens went a lot faster this weekend.

The win for Rahm was the 10th of his career and fourth on the PGA Tour. It also moves him past Rory McIlroy in the world ranking after winning in the strongest field that we’ve seen in the post-coronavirus era. Rahm is now the 24th different player to have the honor of the No. 1 ranking on the tour.

It was another big weekend for the PGA Tour, which was looking to capitalize on the return of Tiger Woods for television ratings. Woods wound up right on Friday’s +3 cutline, shooting a 71-76-71-76 over the four days to go 6-over for the tournament. Early speculation is that he may not play another tournament until the PGA Championship on Aug. 6.

The PGA Tour has been a great example of how to handle this new world that we’re living in. Just recently, Major League Soccer has begun playing games, while Major League Baseball started playing exhibition games on Saturday.

Not to mention, the NBA is set to tip off next week, and the NHL isn’t too far behind that.

Next up for the PGA Tour is a trip to Blaine, Minn., for the 3M Open at TPC Twin Cities. The youngster Matthew Wolff is the defending champion.

This could be a much-less talented field that we see for this weekend’s tournament. After all, most golfers have been in Dublin, Ohio, for the last two weeks and probably want to get back to the comforts of their own home.

Not to mention, the high-scoring Sunday will probably make some of these guys want to get a good and long break to refresh for the following event.