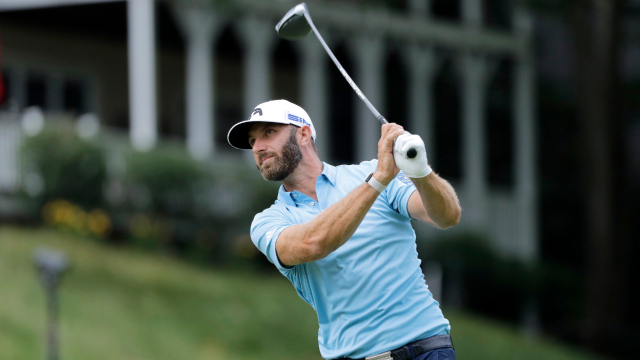 On Sunday, Dustin Johnson capped off a 3-under round of 67 to defeat Kevin Streelman by one stroke at TPC River Highlands in Cromwell, Conn. With the win, he has now won a tournament in 13 straight seasons on the PGA Tour.

Arnold Palmer and Jack Nicklaus each had 17-year winning streaks during their respective careers. It is interesting to note, though, that Johnson is still given credit for a win in the 2013-14 season even though he did not actually win a tournament in the year of 2014 – golf switched to a wraparound schedule in 2013, when his win in Shanghai actually occurred.

It had been a long time coming, by his standards, for Johnson, who hadn’t won a PGA Tour event since March 2019 in Mexico City. Johnson’s 21st career win paid off in a big way for bettors that took the chance on him, returning $2800 on a $100 bet.

“I’m definitely proud of myself for continuing the streak, and I want to keep it going,” Johnson said. “It was a long time between wins, though, and so hopefully it won’t be that long for the next one.”

For the second straight week, there was a weather delay on the final day of competition. Last week, Webb Simpson outlasted the field by turning in a flawless back-nine en route to winning the RBC Heritage.

This week, however, there were only three holes left to be played after the delay. Johnson had to endure that and a nice push from Kevin Streelman, who also shot a 67 on Sunday.

“I’ve had a few missed cuts, so to come back and finish a solo second is nice. But to be that close and perform and be right there, I’m just a little disappointed right now,” Streelman said.

Johnson had a bit of a scare late, at 19 under, when his tee shot on the par-4 15th went way left and came within a matter of inches from going into the signature lake around the finishing holes. His first pitch didn’t make it to the green, and he hit the second to 4 feet to save par.

“It was lucky, but I still had to make a good up-and-down to make par,” he said.

Streelman had success at TPC River Highlands back in 2014, reeling off seven straight birdies en route to the victory. In this weekend’s tournament, he had the opportunity to put the pressure on Johnson even more but missed a deep 37-foot birdie attempt on the 18th hole that fell just short.

This weekend was yet another thrilling finish all the way down to the end, with multiple golfers battling until the end.

Mackenzie Hughes got the tournament off to a thrilling start with a first-round 60 but failed to capitalize on numerous birdies over the next three days. Unfortunately, it was too little too late for Hughes as he wound up finishing with two long birdie putts on 17 and 18 to finish just two strokes behind Johnson for a third-place finish.

There were also guys like Rory McIlroy, Bryson DeChambeau, and Phil Mickelson that made late pushes before finally falling short of the grand prize.

Golf is really doing a great job in these treacherous times of the coronavirus pandemic. Even though there have been a few positive tests, those cases have been handled safely while still resuming play.

Next up for the PGA Tour is the Rocket Mortgage Classic at Detroit Golf Club. According to FanDuel Sportsbook, DeChambeau is the odds-on favorite at +650 to win the tournament.