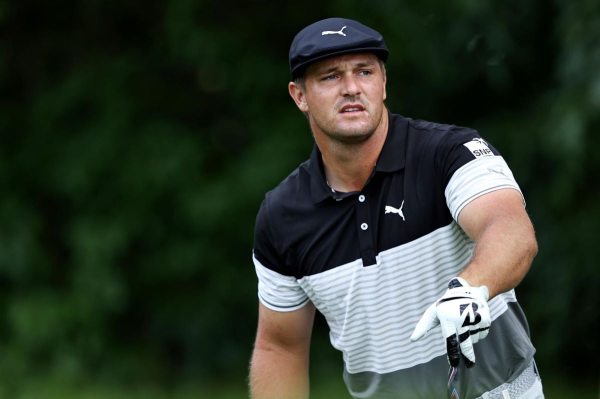 After coming so close to winning each of the last three tournaments in the post-coronavirus era, Bryson DeChambeau finally came through in a big way to win the Rocket Mortgage Classic. A final-round 7-under 65 was good enough to win by three strokes over Matthew Wolff.

In those previous tournaments, DeChambeau finished third in the Charles Schwab Challenge, eighth in the RBC Heritage and sixth in the Travelers Championship. In fact, before the coronavirus pandemic, he also finished fifth in The Genesis Invitational, second in the WGC-Mexico Championship and fourth in the Arnold Palmer Invitational.

The moment on Sunday was a long time coming for DeChambeau, who has been experimenting with different equipment and new angles of hitting the ball. Not to mention, he also gained 40 pounds in the process via a strict diet regiment that includes nice-and-easy options like steak, eggs, and shakes.

While the next major tournament, the PGA Championship, isn’t until a month away, DeChambeau believes that this latest win can catapult him to bigger and better things.

“It’s a lot of momentum for the majors. I feel like it’s a good test run for me, hitting drives in tight areas. No. 7 wasn’t easy this week, and I hit great drives there all week,” DeChambeau said after the Rocket Mortgage Classic.

“(On hole) 18, I had been doing a great job when I had to — absolutely had to. If I hit it in the water or a little left or a little right, I’m struggling to make par, but I was able to give myself a nice little wedge shot in there.

“It gives me a little confidence moving forward that I know I’m headed in the right direction with my driving and my game.”

DeChambeau knows what a big advantage he has off the tee, and that’s something he’ll continue to use in his favor. Other players will certainly have a tough time trying to catch up – that’s for sure.

“Yeah, there’s no secret that hitting the ball far is a huge advantage,” Viktor Hovland said. “Now, you’ve got to hit it straight as well to gain all the shots like (he) has been gaining to the field. I think, you know, you can look at him and say, ‘Oh, that’s crazy, I would never do that.’ But the fact is that it works.”

Surprisingly, DeChambeau said that he wasn’t comfortable using his driver off the tee after the first round of the Rocket Mortgage Classic. However, after the third round, he said that it was getting better and better with the confidence and comfortability coming back every day.

“I’m not even worried about that,” DeChambeau said. “That’s one of those things that when everything lines up and comes into play, that’ll take care of itself.”

As long as DeChambeau’s driver is working, the rest of his game should follow suit. There were numerous long putts that he hit over the weekend that kept the pressure on the rest of the field.

Next up for the PGA Tour is a trip to Muirfield Village Golf Club in Dublin, Ohio, for the Workday Charity Open. FanDuel Sportsbook has Justin Thomas listed as the +1200 favorite with Jon Rahm (+1500), Patrick Cantlay (+1500), Brooks Koepka (+1600) and Hideki Matsuyama (+1700) not too far behind.

DeChambeau will not be in the field for the Workday Charity Open this upcoming weekend. That’s good news for the rest of the competitors, who are looking to make their mark in the post-coronavirus era that we’re all engulfed in.

Tonight, two pitchers whose records could use a little polishing match up as the St. Louis Cardinals welcome the Miami Marlins to Busch Stadium to open a three-game series. Cardinals hurler Adam Wainwright has not picked up a win since May 20, while Pablo Lopez’s win in his most recent start last week was his END_OF_DOCUMENT_TOKEN_TO_BE_REPLACED