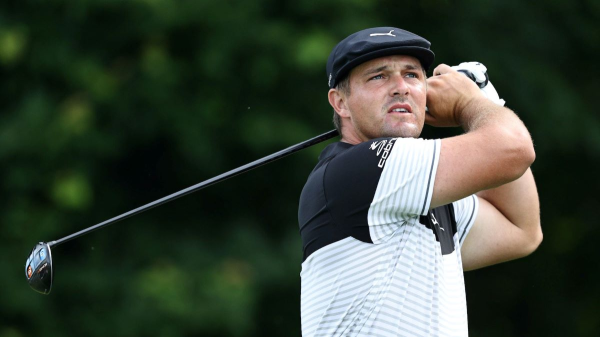 One week after placing his third straight Top-10 finish of the post-coronavirus era, Bryson DeChambeau comes to the Rocket Mortgage Classic in one of the best forms on the PGA Tour. At only 26 years of age, the long-range bomber off the tee could make some serious noise at Detroit Golf Club this weekend.

According to FanDuel Sportsbook, DeChambeau has +650 odds to win the tournament outright. In the last three tournaments, he placed third at the Charles Schwab Challenge, tied for eighth at the RBC Heritage and tied for sixth at the Travelers Championship.

Although DeChambeau may not feel like this tournament will be the most important tournament in his young career, there’s still plenty to take from an event like this.

“For me, it’s more of a long-term investment,” he said at a news conference Tuesday. “These are great preparation tournaments. I love them. I want to win them. Every tournament I come to, I want to win, but you know, again, the most important things for me are those majors.”

This will be DeChambeau’s first time playing at the Rocket Mortgage Classic – as it will be for numerous other golfers. After all, guys have missed about three months of golf, and these lesser tournaments are just another chance for some of these guys to get of the house for a chance under this new normal we’re living under.

In the time during the layoff, DeChambeau was able to create a new diet and different lifestyle regiment to take his game to the next level.

“We were able to look at different things that most people aren’t normally capable of looking at,” DeChambeau said. “For example, we were looking at ground reaction forces and how I apply force to the ground to create speed. And there’s some unique properties that I have in how I create speed compared to other players.”

DeChambeau believes Detroit Golf Club is a lot similar to that of Belmont Country Club in Fresno, Calif., where he played a lot growing up. In this setting, he believes things will be fairly easy for him to navigate.

“We’re going to see what it produces for me, but being able to hit an 8-iron 195 yards is a pretty good asset,” DeChambeau said. “Even though it limits my driving capabilities, my irons are going to be a lot shorter going into the greens no matter what club I have.

“I think there’s a lot of bunkers that are around like 290 (yards), so hopefully I’ll be able to clear those and take those out of play.”

As for DeChambeau’s competition, Webb Simpson (+1300) will be right there on his heels, fresh off a win at the RBC Heritage on Father’s Day. Simpson, though, took last week off, so we’ll see if it takes him a few holes to get back in the groove.

Let’s also not forget about Fowler, who has Rocket Mortgage as a sponsor. Is anyone feeling a narrative this weekend?

Golf is doing quite well in the post-coronavirus pandemic, getting three tournaments off without a hitch just yet. The hope is that the good times continue to roll on. After all, there is not much else grabbing our attention in the sports world these days.