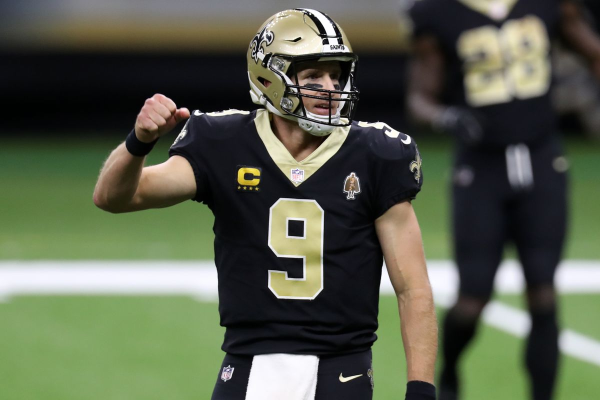 They’re calling it the “Death Star,” but it remains to be seen if it has the power to shoot down Drew Brees and the New Orleans Saints.

The Las Vegas Raiders will open up their new building, Allegiant Stadium, Monday night. A few rules we’ve become used to might be challenged in this one. Typically, home dogs on Monday night do well, but is that still true with no fans? And typically, the Saints are not quite the same team away from home. But this road trip is simply to another dome environment, which is almost always friendly to a Sean Payton offense. Both teams come in at 1-0. The Raiders outlasted Carolina last week 34-30 while the Saints ruined Tom Brady’s Bucs debut 34-23.

The Saints Go Marching In

The Saints do a lot of marching these days, on the ground that is. In other words, they don’t throw it like they used to. Don’t let the 34 points they posted on Tampa Bay fool you. The Bucs actually outgained the Saints by 39 total yards and Brees only threw for a total of 160 yards. As Brees has aged, this offense plays closer to the line of scrimmage than it used to. They’ll also be without top offensive weapon Michael Thomas, which could limit their explosiveness and allow the Raiders defense to key on Alvin Kamara. With both of these teams putting up 34 points last week, the tendency will be to think this is going to be a shootout, but that might not be the case. I love the under 48.5 in this one. The Saints defense is solid and should present a challenge for Las Vegas. And with Thomas out, the Saints offense isn’t quite as scary.

Does the Death Star have Weapons?

I get it, Josh Jacobs won you your fantasy game last week so now you think he’s an unstoppable force. Don’t get me wrong, Jacobs is really good and already on the doorstep of joining the league’s elite runners. But his performance last week was a little circumstantial. All 3 of his scores last week came from inside the 10 yard line and he averaged less than 4 yards per carry. Combine that with the Saints run defense, which last year ranked 5th in the NFL, and stats will be harder to come by for Jacobs this week. As far as player props to score a touchdown, Jacobs is the 2nd favorite at -143. Only Kamara is more expensive at -155. I feel like avoiding both in this one. With Thomas out, the Raiders will lock in more on Kamara, and Henry Ruggs is out for the Raiders, which allows more focus on Jacobs. For player scoring props, look to the tight ends in Darren Waller (+165) and Jared Cook (+140). The Saints gadget quarterback Taysom Hill is also a value play at +300.

The offenses seem to be ahead of the defenses so far this year in the NFL. Points are coming in bunches. The Cowboys and Falcons just posted a 79 point game Sunday, for example. Only 2 games in the entire league fell shy of 40 total points, and one of those was the Colts-Vikings game which totaled 39. With numbers like that, an offensive guru coaching matchup with Payton versus Jon Gruden, and a dome environment, there’s a pull to play the over. But all that seems too easy. As mentioned, I love the under. The top receivers are out and the actual rushing attacks for these two teams were not as strong as some of the simple statistics suggested. These facts affect more than just the over/under. They also affect which side you should take on the line.

Something isn’t quite right with the Saints, even though they rolled in week 1 over the Bucs. A deeper dive on the numbers tells you they rolled up points because of Brady turnovers. I don’t think they’re going to get those against Carr, who did a nice job of taking care of the ball last week. Without those turnovers, the Raiders are a more even match for the Saints than you might think. 5.5 points is too many, especially for a home team on Monday night opening a new building. Take the Raiders +5.5 and the under 48.5. If you really want to be aggressive, take the Raiders on the money line, I think they’ll have a chance to win this one outright.

Phillies vs. Astros (Oct. 3): Will Philadelphia clinch a postseason berth tonigth in Houston?

Best Prop Bets for Chiefs vs. Bucs (Week 4 Sunday Night Football): Will Brady and Kelce bounce back after subpar showings in Week 3?

Cardinals vs. Panthers Week 4 Betting: Can Arizona Beat Carolina for the First Time Since 2013?