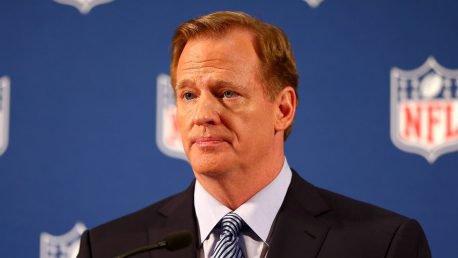 On baseball’s opening day, the evidence is clear that betting has helped the NFL to its position as king and that there is much more on the table in the years ahead.

When the NFL announced its TV deal on March 18, its focus on the future was clear. The traditional network plan stayed in place but the league found ways to expand its reach, including Amazon as the exclusive home of Thursday Night Football.

But there’s more than meets the eye – and it wasn’t even in the fine print made available at the announcement.

The Hollywood Reporter revealed the NFL, which will collect $10 billion-plus per year, included no opt-out for the TV partners but did include an opt-out for itself.

The league's deals with Disney, NBCUniversal, Fox, ViacomCBS and Amazon, set to pay the league more than $100 billion, is even sweeter.

After seven years, the NFL could open up the bidding again, and perhaps by that time new players such as Google and Facebook will eagerly come to the table.

The opt-out options with NBC, CBS, Fox and Amazon trigger after the 2029 season, and with Disney after the 2030 season.

With sports gambling gaining favor with each passing month, and with more states due to legalize it in the coming few years, the NFL undoubtedly believes in a bigger payday toward the end of this decade.

There is such a large upside to the burgeoning relationship among the NFL, TV and gambling that a huge boost in revenue seems almost a lock.

The integration between viewing and betting inevitably would make the rights much more valuable.

The increasing consumer dissatisfaction – and increasing options – with bundling should lead to a greater search for value.

“If current cord-cutting trends persist, by the middle of this contract, there could be more homes outside the bundle than in the bundle,” MoffettNathanson’s Michael Nathanson wrote about the new deals.

A growing number of Americans jumped into the sports-gambling pool with the 2021 Super Bowl and NCAA March Madness drawing billions more dollars in wagers than last year's games.

Roughly 7.6 million people placed bets on the game through platforms including FanDuel and DraftKings, a 63% increase from 2020.

With more than 47 million Americans betting on March Madness, the association said the number of online bets on the tourney has tripled since 2019.

The online sportsbooks found a sweet spot with the effects of the coronavirus pandemic, which forced hundreds of millions of people to stay at home.

"The pandemic had a lot to do with Americans not going to physical locations anymore," said Casey Clark, a gaming association senior vice president. "You weren't going to in-person sporting events and you weren't going to brick-and-mortar sportsbooks.”

A Baseball and Betting Conversation with Brent Musburger

Broadcasting icon and VSiN managing editor Brent Musburger spoke with CNBC on Opening Day and weighed in on sports gambling, beginning with baseball.

He was asked, “Where does baseball fit?”

“When I grew up in the ‘50s and ‘60s … baseball was king,” he said. “They booked more baseball bets than anything else.”

But television heralded the rapid ascension of the NFL, whose popularity today is unquestioned at the top of American sports and gambling.

“It’s not even close,” Musburger said. “Right there with it is college football.”

In second place, also surpassing baseball over the past couple of decades, is the NBA and college basketball, Musburger said.

“Baseball slips down to No. 3, (but) there are still especially some very sharp bettors that hone in on baseball.”

As for the preferred forms of wagers?

“Out here in Montana, I’ve been watching the Yankees and Toronto Blue Jays,” Musburger said. “You could have bet that game with just the first five innings (targeting the starting pitchers). But I say ‘buyer beware.’

And, finally, as for the prop bets?

“I would advise anybody going in to bet sports: Be careful about those prop bets.”

Musburger told CNBC it’s fine to have fun — as long as you have the extra money to afford the fun.

“I always bet that (Super Bowl) opening coin flip,” he said. “I was told ‘Tails’ (would) come up. Because when they carved out the coin that the NFL uses, the head is heavier. (The ‘Heads’ side is) gonna be on the ground.

“Of course, I bet tails and of course it came up heads.”

So, the veteran gambler says to stay away from props: “Bet the games, or the over-unders, or the money line. That’s actually where you should gravitate if you wanna do it.

“Be careful, OK? These are tough lines. If it’s money you’re gonna need to pay the rent or buy food for your family — forget about it. Don’t do it.

“If you think you're gonna beat the bookies regularly, with their numbers, I’m telling you right now: You’re crazy; you’re not gonna do it.”