FanDuel and the Associated Press: What the agreement brings to sports betting 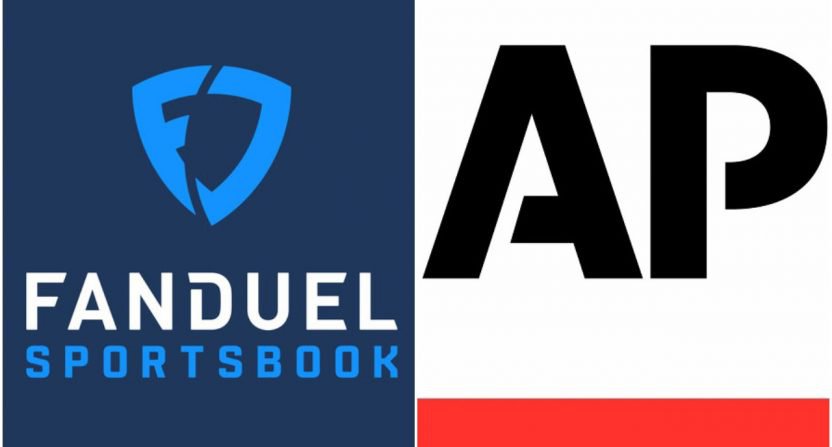 Following news of the FanDuel-Associated Press agreement earlier this week, the question becomes how will this development influence the changing world of sports betting.

The arrangement calls for the AP to be paid by FanDuel to use only the online sportsbook’s gambling odds in its sports coverage.

All the details were not made public – such as the duration of the partnership or the amount of money FanDuel is paying AP – but it’s clearly a strong step for FanDuel and for sports betting as a whole.

The Associated Press is 175 years old and not given to new or unusual agreements with fledgling businesses, but FanDuel is the foremost online sportsbook and has engendered respect – and a ton of business – in the wake of the 2018 U.S. Supreme Court decision to overturn the ban on single-event sports wagering.

The deal is set up to be a marketing agreement rather than one requiring direct affiliate payments, according to Axios.

What does FanDuel receive by joining forces with AP?

FanDuel, based in New York with offices in California, New Jersey, Florida, Oregon and Scotland, is moving toward becoming a media and content company as well as a gambling company, company CMO Mike Raffensperger told Axios.

In addition to FanDuel itself, FanDuel Group brands include Betfair US and TVG.

As for why this makes sense for the Associated Press (in addition to receiving FanDuel’s money, of course), the organization will not cede any editorial control of all content; the lone stipulation being that AP is now contractually obligated to use sports betting data only from FanDuel.

An exec for the news service underscored the importance of integrity and consistency in the fast-moving sports betting evolution.

“As sports betting becomes more commonplace, our customers are increasingly asking for this kind of information,” Barry Bedlan, the Associated Press global director of text and new markets products, said in announcing the deal. “It makes sense to work with one of the largest, reputable sportsbooks in the United States to provide a consistent, credible reference point for AP and its customers.”

“AP is a globally recognized leader in trusted news making them the ideal source for us to disseminate our industry-leading sportsbook’s proprietary odds and content,” Kaplan said.

The move toward a reputable and understandable playing field

More cooperation between entities such as AP and FanDuel will help potential consumers find clarification, too. With a dependable news source presenting one set of odds information, there should be less doubt as to the legitimacy of the gambling content.

Many media outlets want to wade into the betting waters – it's good for business, after all – but sometimes use wayward odds including information from illegal bookmakers.

Consumers want odds they can actually use to wager.

Recent reports from the American Gaming Association indicate more than half of people who bet with illegal operators believed they had wagered legally.

The AGA wants more of a focus put on educating the media on the differences between betting sites.

Penn National CEO Jay Snowden made reference to that concern a few weeks ago.

“It’s not like people want to bet illegally, but a lot of people don’t know,” Snowden said at Penn National’s Quarter 1 earnings call. “That’s an industry effort to make that common knowledge.”

Founded in 1846, the AP spans the globe and, via its news release, says it “remains the most trusted source of fast, accurate, unbiased news in all formats and the essential provider of the technology and services vital to the news business. More than half the world’s population sees AP journalism every day.”

Along with BetMGM and DraftKings, FanDuel is not resting on its success, having spent the most money among gambling advertisers on spot TV ads during 2021’s first quarter.

(Spot ads are the usual 30- or 60-second television commercials produced by the companies doing the advertising themselves.)

With each of the companies’ campaigns targeted aggressively to the busiest of the country’s sports bettors, the strategy is well-structured; the 7.3 million daily fantasy bettors in the U.S. have combined $780 billion in earning power, according to data from Nielsen Scarborough.

And the younger consumer base for online sports betting is especially appealing.