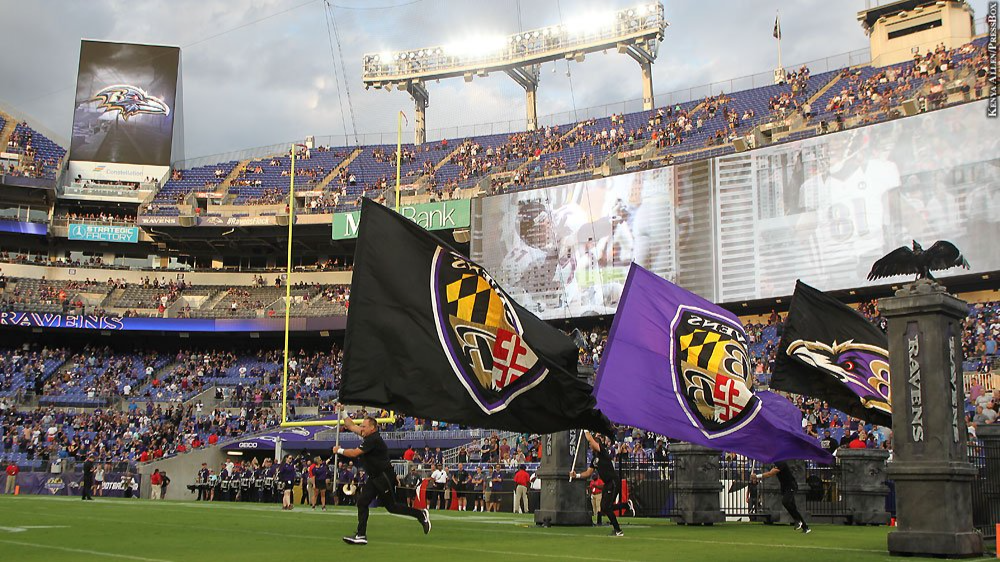 The National Football League’s Baltimore Ravens are moving quickly into the sports betting waters, diving in by reaching deals with BetMGM and Sportradar announced the past two days.

Maryland Gov. Larry Hogan earlier this week signed a bill that would establish sports gambling in the state, and the Ravens will operate their own sportsbook under the plan.

The BetMGM partnership will influence the Ravens’ marketing presence

New Jersey-based BetMGM now will become a prominent part of the Ravens’ multiplatform visibility as part of an agreement announced on Wednesday.

The brand will appear on the football franchise’s digital and social platforms, inside the team’s home stadium, M&T Bank Stadium, and in other promotional materials.

“When we began the process of carefully identifying partners in the field of sports betting and digital gaming, one of our top priorities was finding unique ways for Ravens fans to further engage with the team,” Kevin Rochlitz, the Ravens chief sales officer, said in the announcement.

Among the other specifics:

The physical sportsbook at the stadium is awaiting details, with in-person wagering a possible option to go along with the mobile app. According to the Baltimore Sun, “state officials must still create a regulatory framework for the new industry.”

The plan approved by Gov. Hogan on Tuesday calls for in-person licenses for casinos; at the homes of the Ravens, Major League Baseball’s Baltimore Orioles and the NFL’s Washington Football Team and with thoroughbred horse racing tracks at Laurel and Pimlico.

It is still to be determined whether wagering would run year-round or just on game days.

Baseball’s Washington (D.C.) Nationals have a partnership with BetMGM that brings a year-round, physical sportsbook that could open this summer.

“The Ravens are an incredible organization with a rich history, and we’re proud to become the team’s first official partner in the gaming space,” said Matt Prevost, BetMGM’s chief revenue officer. “Through BetMGM, Ravens fans will be able to engage with their favorite football team at a new and heightened level.”

On Thursday, the Ravens announced they have reached an agreement with sports betting firm, Sportradar, which also has partnered with the New York Jets.

The alliance is the first of its nature for a major U.S. pro sports team.

“As we continue increasing our visibility in the world of sports betting and digital gaming, the Baltimore Ravens are honored to be among the first NFL teams to partner with an industry leader in Sportradar,” Ravens Chief Sales Officer Kevin Rochlitz stated. “Through its unmatched sports data intelligence, Sportradar provides an efficient and robust outlet for our partners to better engage with and cater to fans in this rapidly evolving industry.”

Sportradar is a sports technology company that helps clients such as the Ravens and Jets to address corporate needs in an innovative manner. The company also is well versed in how to better leverage the football product with regard to the growing sports wagering marketplace.

“Sportradar is thrilled to be working with the Jets and the Ravens on this strategic initiative in the ever-evolving US market,” said Mike Smith, Head of Advertising, U.S., Sportradar. “Legalized sports betting presents new and unique opportunities for teams, as well as betting operators, and the Jets and Ravens are taking a step in raising the value of their brands for their respective betting sponsors.

“Our end-to-end platform provides each team a number of levers they can pull to ensure they’re delivering a personalized experience based on their distinct fanbases, while maximizing their marketing investment.”

With the continued expansion of legal sports betting in the U.S., finding a technology partner that knows how to navigate the sometimes-confusing and unpredictable marketplace — and uncover potential areas for growth — is paramount.

In its story on Thursday, the Baltimore Raven blog noted:

Sportradar, which has deep expertise in these areas and strong relationships across the sports betting and sports entertainment ecosystem is positioned to help businesses maximize the wide range of opportunities brought about by legalized sports betting.

Sportradar, a Swiss company, was replaced this year by Genius Sports as the NFL's exclusive provider of NFL stats and sports betting data.

Sportradar aims to personalize the fan experience and heighten the engagement the fans feel for the team and its products.

Noting it has “deep expertise in these areas and strong relationships across the sports betting and sports entertainment ecosystem,” Sportradar says it is “uniquely positioned to help businesses maximize the wide range of opportunities brought about by legalized sports betting.”

In March, Sportradar reportedly reached a deal with a SPAC — Horizon Acquisition Corp. II — that would allow it become publicly traded. Negotiations are continuing, according to reports, and a deal valuing the sportsbook data provider at $10 billion remains on the table.

Over the past couple of weeks, with no firm agreement yet in place, the two sides are beginning to share financial details with institutional investors, and unidentified sources cited by Sportico say a deal could soon be announced.

After opening the season on the road in Week 1, both the Ravens and the Jets open their home schedules on Sept. 19 against the New England Patriots and Kansas City Chiefs, respectively.