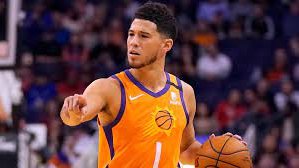 No Paul, no problem Game 1 of the Clippers vs Suns series as they took the early lead in the Western Conference Finals. Dropping the series opener is nothing new for the Clippers, however. This makes three straight series where they have been down 1-0. Will they reverse the trend and even things up in Game 2? There is still no word about when the Suns might get star point guard Chris Paul back on the court, but from what we saw in Game 1 they are not holding anything back.

Can the Clippers Overcome Another Slow Start to a Series?

They only lost by six points, so Game 1 was hardly a disaster. But that “special feeling” from winning four straight against Utah, the last two without Kawhi Leonard, is gone.

Paul George did not wilt in this big game. In fact, he did far from it, scoring 34 points to lead the Clippers. He was not very efficient though and the team needs him to be more involved all over the floor for them to have a real chance.

Reggie Jackson continues to have a great postseason and was the second-leading scorer with 24 points. He has had a funny career. It has been about fit, not talent, and L.A. looks like the spot for him. He is just a scorer though.

That is why I was not surprised to see Rajon Rondo play more minutes than he has since the first game of the Utah series. He scored 9 points and led the team with 8 assists but was -11. He is usually such a positive force out there.

When you lose Game 1 in a pivotal series the question is always what do we do differently other than play better. I am not sure where the Clippers look.

L.A. has to find a way to rebound. The number is coming down, but I not sure that is a power-rated move vs. classic criss-cross in the playoffs.

Can the Suns Continue to Ride the Wave of Success?

In my series preview, I thought there was a very good chance that Devin Booker, not Paul George would be the best player in the series, and that any game where he was the leading scorer would likely be a Phoenix win. That looks pretty good so far.

Booker scored 40 points, but it did not prevent the Suns from doing their whole balanced thing. All of their starters reached double figures, and they even got another 12 points from forward Cam Johnson off the bench.

All the starters shot at least 50% from the field too, which is a great sign that the Suns were well prepared and able to get the shots they wanted. They did give up 114 points, so the defense wasn’t great, but they are in control of the series now. Reserve Cam Payne was very effective in filling in for Paul with 11 points and 9 assists. That was second on the team to Booker’s 11 assists. Booker had a triple-double, the first of his career. He is locked in!

Clearly, a week off did not throw off the Suns too much. They are pretty solid favorites to go up 2-0 in the series.