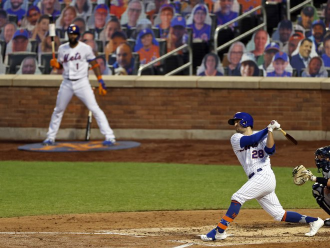 After the Mets swept the Friday doubleheader, the New York squads matchup once again at Yankee stadium.

Prior to Friday’s doubleheader, the Yankees have won 75 of the 127 subway series matchups, and halfway into a COVID-19 shortened 2020, the Bronx Bombers are in position to build on their historical lead.

The Yankees sit 16-13, in a playoff spot but behind AL East division leaders the Tampa Bay Rays, while the Mets are 15-16 and ahead of only the Washington Nationals in the NL East. Heading into the season Mets general manager Brodie Van Wagenen claimed his team had ‘probably the deepest rotation in baseball,’ but it has been the teams offense keeping the team afloat so far — the Mets lead the majors with a team .256 on-base percentage and are second in average (.270). The Yankees, too, have been reliant on their lineup to win games, owning the fifth best OPS in the league and only the 14th best team earned run average (4.32). After offseason acquisition Gerrit Cole (3.51 ERA) and Masahiro Tanaka (3.48 ERA), the Yankees haven’t received reliable starting pitching in 2020.

The Yankees will send J.A. Happ (1-1, 6.39 ERA) to the mound Saturday after Jordan Montgomery and Jonathan Loaisiga started in the Friday doubleheader. Happ has struggled since signing an extension with the Yankees prior to the 2019 season, posting a 4.91 ERA last year and even hinting that New York may be trying to manipulate his starts so a third year of his contract does not vest. Happ has been struggled with control this season, walking 7.1 batters per nine innings (up from his career norm of 3.2)

The Mets starting pitching for Saturday’s game is yet to be announced. Michael Wacha started the first game of Friday’s double header, followed by David Peterson, and Rick Porcello and Seth Lugo are set to start both legs of Sunday’s double header. Mets swingman Robert Gsellman could start today or follow in some capacity in Saturdays matchup as he didn’t pitch Friday.

Despite another year of major injuries to their star bats the Yankees have found hitters to rise to the occasion and propel them into a playoff spot. One such hitter is 1B/DH Luke Voit, who has hit up and down the Yanks batting order (including lead off Friday) and slashed an MVP rate of .349/.429/.860 heading into the weekend. Voit also owns a 1.289 OPS at Yankee stadium where he has hit seven of his 11 home runs.

While the Mets injuries have mainly come on the other side of the baseball, their X-Factor for Saturday’s game is also an infielder — 3B/LF J.D. Davis. Facing left handed pitchers (like Happ) Davis has slashed .290/.421/.484 for an OPS more than 40 points higher than his .867 on the season. For a team with only the 14th best OPS against southpaw starters, the Mets will need lefty-mashing bats like Davis to support Pete Alonso if they are to take the subway series win.

Though I would normally suggest bettors take advantage of the Yankees in a situation like this (sliding in the standings, throwing their worst starting pitching, but still likely statistically favoured), it is still hard to bet against the Bronx Bombers facing uncertain pitching. The Mets, aside from DeGrom, have gotten shaky pitching at best and the Yankees bats, led by Luke Voit, will be able to outscore their opponent in spite of injuries.

While the both legs of the Friday doubleheader went under, expect the over (if it is less than 10 or 11) to hit Saturday with both rotations throwing their number fives.