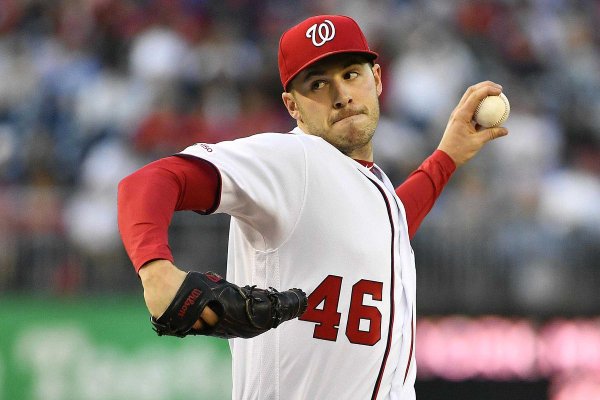 We have eight games on the MLB slate tonight, and the slate is one that I really like right out of the gate. I generally attack my favorite stacks and try to be creative at pitcher to get in lineups that most people aren’t able to create. This slate sets up with only one true star pitcher and a few rising stars to look out for moving forward. Other than that, we have a lot of interesting options and possibilities to look at and attack on this slate.

You can play Patrick Corbin, and I will not blame you whatsoever. Corbin is in one of the better spots on the slate and is probably the best pitcher on the slate. I will likely avoid Corbin on all sites because of the ownership that I think he will accrue. Everyone wants to go with the safe options at pitcher, and we really don’t have many options, if any, that would be labeled safer than Corbin. I will try to fade the ownership at the highest price on the slate and go elsewhere to capture similar upside.

I have no interest in Mike Minor when he is priced above any, or Paddack, Soroka, or Peacock. I really prefer to start with one of those three pitchers in most lineups today. I prefer Soroka and Paddack over Peacock rather significantly, but I still like Peacock’s upside in a spot vs. Chicago. Paddack might be the most talented pitcher on the slate, and I expect him to only rise in price over the course of the season.

I love Paddack’s talent, but I have also been a big believer in Soroka from his first major league start. It will probably come down to ownership between these two pitchers, but I may try to get both in on two-pitcher sites. Soroka is also talented but not quite on the same level as Paddack, but the matchup in San Francisco can make up for just about any talent gap.

Of the rest of the pitchers on the slate, I prefer J.A. Happ over Luke Weaver over Yu Darvish over the field. Happ has an elite matchup against the Orioles and has plenty of talent for the price tag. Luke Weaver’s pitches have gotten better in terms of break, and that has helped him regain form from a few years ago. I’m not rushing to play Weaver, but I doubt the ownership talks me off of him, and he does have upside.

Yu Darvish is a pitcher that I may attack both ways of this slate. Darvish has walked 33 batters in 42 innings. That is SO BAD that I want to stack against him until I know it is fixed. When you have walk issues to that extreme, you often create long innings and a lot of run potential for stacks. It’s often rare that someone with walk problems isn’t also leaving more pitches than normal in bad spots over the plate.

On the other hand, Darvish had no walks and 11K’s in his last outing. Is that a sign of things to come? I don’t know, but he does have the stuff to exceed his price tag if he has figured something out.

Andrew Cashner has been good recently and is viable, but I am not going there. Cashner relies heavily on umpires giving him the bottom of the zone, and I think that has a lot to do with this streak.

I generally want to avoid bullpen games, as they often result in a tough time for hitters to get into a rhythm offensively because the team is just more willing to take out their reliever in the third inning than they are to take out a struggling starter. I don’t mind Houston, but I expect them to be more popular than I would like.

My favorite spots to attack are the Yankees, Rangers, and Cubs because they are all teams getting over-the-hill, veteran pitchers that have a relatively long leash. If any of Arrieta, Cashner, and Leake struggle in the first few innings, they are likely going to go out there until they have given up some big numbers.